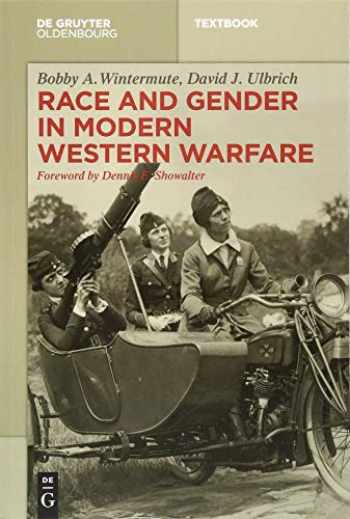 "This work is not merely a trailblazer, but a pathfinder that successfully establishes race and gender as self-sustaining elements of analyzing the causes, nature, and effects of war making."
-Dennis E. Showalter, author of Instrument of War: The German Army 1914-1918

Race and Gender in Modern Western Warfare by David J. Ulbrich and Bobby A. Wintermute fills a longstanding gap in the historiographical and theoretical intersection of the fields of race, gender, and war. The book offers an introduction into how cultural constructions of identity are transformed by war and how they in turn influence the nature of military institutions and conflicts.

Focusing on the modern West, this project begins by introducing the contours of race and gender theories as they have evolved and how they are employed by historians, anthropologists, sociologists, and other scholars. The project then mixes chronological narrative with analysis and historiography, taking the reader through a series of case studies, ranging from the early nineteenth century to the modern-day Global War on Terror.

The purpose throughout Race and Gender in Modern Western Warfare is to not create a list of so-called "great moments" in race and gender, but instead to create a meta-landscape in which readers can learn to identify for themselves the disjunctures, flaws, and critical synergies in the traditional memory and history of a largely monochrome and male-exclusive military experience.

The final chapter considers the current challenges that Western societies, particularly the United States, face in imposing social diversity and tolerance on statist military structures in a climate of sometimes vitriolic public debate. Race and Gender in Modern Western Warfare represents Ulbrich and Wintermute’s efforts to blend race, gender, and military war; to problematize these intersections; and then to subsequently provide answers to those problems. By the end of the book, readers will have a greater understanding of the experience of women, people of color, and the intersections of those two identities within Western warfare, and will push readers to recognize these same conversations today.