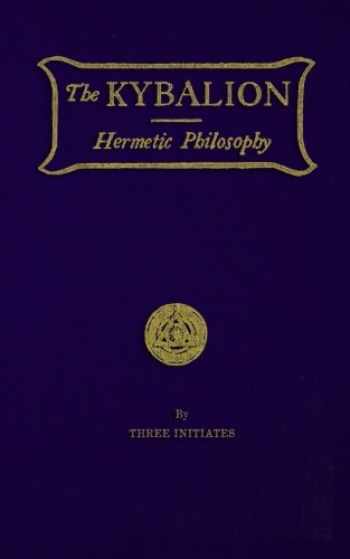 Acknowledged authors Initiates", "Three wrote The Kybalion: Hermetic Philosophy comprising 224 pages back in 2017. Textbook and eTextbook are published under ISBN 1976061512 and 9781976061516. Since then The Kybalion: Hermetic Philosophy textbook was available to sell back to BooksRun online for the top buyback price or rent at the marketplace.
Show more

It is said that the KYBALION always appears at exactly the right time in the reader's life. Welcome to that time!

The KYBALION is a mysterious volume of great wisdom written by three Initiates and was first published in English by the Yogi Publication Society of Chicago USA in 1908. The most familiar edition is a plain volume bound with blue cloth and stamped with gold.

But what is it? The KYBALION is an initiation into a mystical tradition that has survived through the ages from Antiquity to the Present Day, existing just outside the perception of most people. The core of the KYBALION is a series of aphorisms that go back to earliest times and were passed down from master to student for millennia, the exact significance and meaning being closely guarded until the publication of this book.

The KYBALION is organised according to seven basic principles, which serve to form the basis of all Hermetic philosophy:

1. Mentalism. “The All is Mind; the Universe is mental.”

2. Correspondence. “As above, so below; as below, so above.”

5. Rhythm. “Everything flows, out and in; everything has its tides; all things rise and fall.”

6. Cause and Effect. “Every Cause has its Effect; every Effect has its Cause; everything happens according to Law.”

7. Gender. “Gender is in everything; everything has its Masculine and Feminine Principles; Gender manifests on all planes.”

Sound familiar? It should. The KYBALION forms the philosophical basis of all knowledge. If you have heard of that modern concept known as "The LAW OF ATTRACTION", then you have seen but a mere fraction of the potential of the ancient wisdom to be found within the KYBALION.