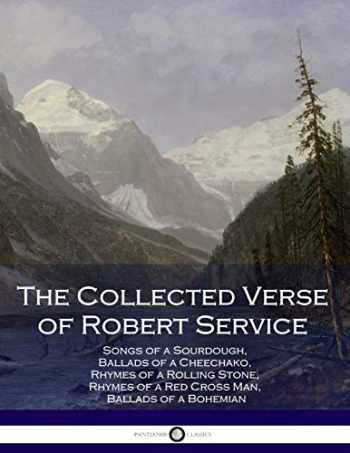 This anthology combines five earlier collections of verse by Robert Service, a British-Canadian poet affectionately termed "the Bard of the Yukon" for his poetic depictions of life in rural Northwest Canada.
Beginning life in Lancashire, England, as a boy Robert Service demonstrated a liking for verse and poems, particularly the romantic poetry native to England. He spent three years with his aunts in Ayrshire, Scotland before finally settling in Glasgow with his parents. In these formative years, he would often write his own poetry, but never took it seriously as a career - instead, he apprenticed at a bank.
Young and idealistic, the age of twenty-one Service moved to the Pacific coast with dreams of working on a ranch as a cowboy. Yet life in North America proved difficult: drifting up and down the west coast, the young man was unable to hold down work for long and often subsisted on family members who had emigrated to Canada. Eventually, the penniless Service would be hired by the Canadian Bank of Commerce, using his experience from Scotland to land the work.
Throughout his undistinguished youth, Service continued to author verses and even made small sums by selling these to magazines such as The Colonist. Yet it was only after his bank sent him to the distant north, to the city of Whitehorse in the Yukon, that poetry became a serious endeavor. Hearing of demand for locally relevant poems, Service at first wrote verse for the local saloon, whose patrons yearned for original entertainment each evening.
After meeting with approval here, Service pursued the idea further - he spoke with locals and heard their stories. He would also venture out into the beautiful wilds of Yukon, and using his own creative flair would author many unique verses. Although the many anecdotes Robert Service used to inspire his verse were unlikely to have occurred, they were all good stories representative of Yukon culture.
Sending a book of his verses south for publication, it was there that Service met with great acclaim. William Briggs, the Toronto-based publisher sought by Service's father realized that the poetry could be a sensation both in and outside Canada and made an immediate offer. The resulting collection, Songs of Sourdough, was an immediate bestseller.
This edition contains Songs of Sourdough together with several later collections authored by Robert Service, who spent later years in Paris. Hoping to replicate the authenticity of his earlier work, Service would often venture to the poorer quarters of Paris to take in the city's vivid underbelly; the resulting collection, Ballads of a Bohemian, is also contained in this collection, as are three other such works.
Show more