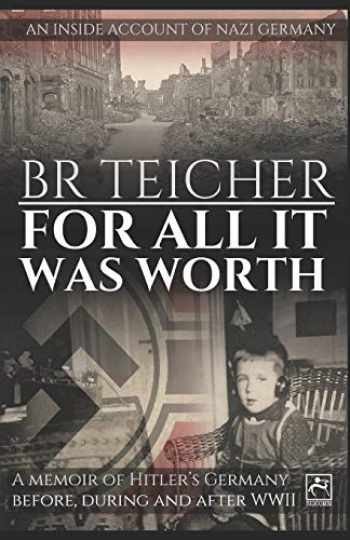 For All It Was Worth: A Memoir of Hitler's Germany - Before, During and After WWII (20th Century Memoirs)

In this powerful memoir of WWII, a young soldier growing up under Nazi ideology provides piercing insights into the rise and aftermath of Hitler’s Germany.
This is the true, personal account of a German soldier’s experiences in Nazi Germany – before, during and after the War. A story of combat and captivity – of courage, deception, and survival – FOR ALL IT WAS WORTH provides piercing insights into the indoctrination of the German people into Nazi ideology and addresses the issues facing German World War II veterans.

The author was born in Dresden in 1924 - the year Hitler’s “Mein Kampf” was published. Growing up during the pre-War Nazi years, he joined the Hitler Jugend. Following harsh basic training, he was sent to the Eastern Front where he saw combat near Kursk. Captured by the Russians, he escaped and was transferred to the Italian Campaign. With his acquired knowledge of Italian and local conditions, he volunteered for the special forces Division Brandenburg, where he was trained in sabotage and intelligence gathering, operating behind enemy lines and wreaking havoc with the enemy's command, communication and logistical structures.

Arriving on leave in Dresden during the February 1945 firebombing, he recounts the terrible aftermath (including the extrication and burial of his father from the ruins of Dresdner Bank) of one of the most devastating and controversial attacks of the Second World War.

Following his return to Italy, and the subsequent capitulation of German forces, he was detained as a PoW in Northern Italy for almost two years. Battle-hardened and disillusioned, he used all his clandestine and organisational skills to initiate successful Black Market operations, while working as an interpreter for the British Army.

Imprisoned in Austria as an escapee, he finally returned to a shattered Germany in 1947, where he elected to remain illegally in the US zone of Occupation. What follows is a gripping story of survival, and an insight into the hardships and privations facing the German people, leading to the Wiederaufbau.

Buy your copy of "For All It Was Worth" today! Much more than a military narrative, the author presents a candid view into the mind and soul of the German people. FOR ALL IT WAS WORTH is an account of Hitler’s Germany and its consequences – and is a remarkable document of value to post-War generations, as well as historians and students of World War II.