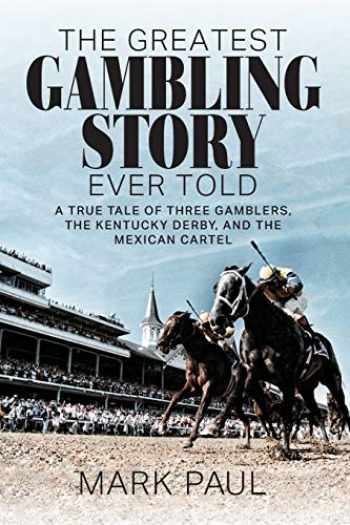 The Greatest Gambling Story Ever Told: A True Tale of Three Gamblers, The Kentucky Derby, and the Mexican Cartel

The Greatest Gambling Story Ever Told is an inspiring personal narrative about a filly who broke through the male-dominated world of horseracing and inspired crowds of men and women alike, along with a trio of gamblers who embark on an unforgettable adventure that's as epic as the historic victory of Winning Colors. It's Seabiscuit meets Narcos, and the best true-life gambling story ever told.

In the late 1980s, a spectacular 3-year-old female racehorse named Winning Colors was being groomed for success under her famous "Hollywood" trainer, D. Wayne Lukas, and the billionaire owner of the San Diego Chargers pro-football team, Eugene Klein. Meanwhile, three fun-loving gamblers, Miami Paul, Dino Mateo, and Big Bernie believed that Winning Colors could be the unlikely female winner of the 1988 Kentucky Derby.

When the gamblers unknowingly place their longshot bet with members of a suspected drug cartel at a racetrack in Tijuana, Mexico, they must figure out how to claim their prize - without getting killed in the process. In a heart-pounding race of their own across the U.S.-Mexico border, the trio come face-to-face with suspected killers, are arrested by the Border Patrol, and fumble their way through the riskiest bet of their lives.

Mark Paul lives for action and adventure at locations where gambling occurs. While racing motorcycles at age 15, he was incarcerated in a Mexican jail (he was released after six days, completely rehabilitated). He began his gambling career by sneaking into Hollywood Park and Santa Anita at age 16 by giving degenerate looking gamblers free betting tickets in exchange for pretending they were his parents. Mark made a 5,000-mile sail boat journey through the Panama Canal and then on to the island of Jamaica, to attend Caribbean and South American horseraces. He completed these gambling junkets alone, via bus, to gamble at the local thoroughbred racetracks. Blond and blue eyed, he stood out from the local horseplayers. He was robbed a few times. He was a participant in a $1 million win on the 1988 Kentucky Derby with two other gamblers through a bet placed in Tijuana, Mexico. Cashing this wager and getting back to U.S. soil alive was the adventure of a lifetime. He has owned interests in 34 racehorses. Mark has enjoyed a long career in commercial real estate in Southern California having transacted over $3 billion worth of transactions. With his wife, Renee, Mark raised over $750,000 for City of Hope Cancer research through events held at the Santa Anita racetrack. In May 2018 the Supreme Court ruled to allow State legalized sports betting. Mark believes that public interest in gambling and sports in general will reach new levels, and he plans to chronicle the lives of adventurous risk takers who aim to win the benefits from life-changing horseraces, and other kinds of sporting events.