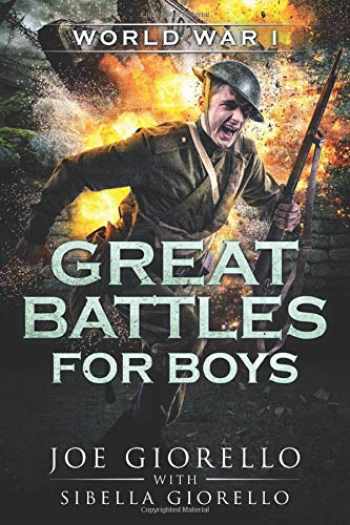 Does your son play videogames for hours but avoids books?

What if you could give him all the excitement of screen time AND also spark his love of reading and history?

Get boys hooked on reading—by giving them books they want to read!

In his highly acclaimed middle-school class “Great Battles for Boys," author Joe Giorello has ignited a love of reading and history in hundreds of boys. Now your son can experience that same thrilling adventure in learning with this engaging non-fiction series written specifically for boys ages 8-14.

In this installment of the bestselling history series, young readers will learn about World War I's major battles, leaders, tactics and modern inventions such as airplanes and tanks that were crucial to “The Great War”—named not because the conflict was so good, but because its losses were so devastating. It's an unforgettable journey into history.

Among the battles covered here:

Other chapters cover WWI’s most fascinating figures, such as Lawrence of Arabia, Sergeant York, and the Harlem Hellfighters. Boys will also gain an understanding of the world events shaped by this monumental conflict, including the Russian Revolution of 1917.

Filled with historic photographs, maps, and notable biographies of ordinary soldiers who accomplished extraordinary feats against all odds, Great Battles for Boys: WWI explains the weapons, tactics, and strategies that helped the Allies topple the Central Powers. Each chapter also concludes with suggestions for further age-appropriate books, internet sites, and movies that the whole family can watch together.

If your son likes action-packed accounts and authentic details, he will love this book.

Pick up Great Battles for Boys today—and march to the front lines of history!
PRAISE FOR THE GREAT BATTLES FOR BOYS SERIES:

“This book should be in school libraries everywhere. It is a treasure trove of information that is engagingly written that makes one feel they are in a great classroom with a great instructor sharing his knowledge in a fun way." —Hall of Fame Amazon Reviewer