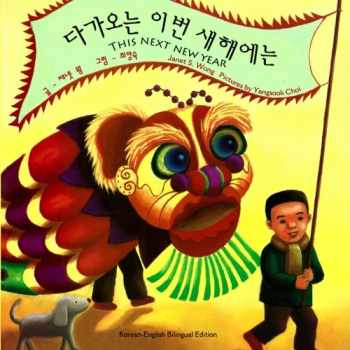 This is the Korean-English bilingual paperback edition of the award-winning Lunar New Year classic (also available in English-only and Chinese bilingual editions).

A young boy looks forward to the Lunar New Year, often called the Chinese or Korean New Year, a time of hope—and you don't have to be Asian to celebrate it! Janet S. Wong's spare, lyrical couplets voice a child's determination to face the new year with courage and optimism. Yangsook Choi captures the spirit of celebration in her vibrant, energetic pictures.

(The following refers to the original English language version of the book.)

A festive, truly engaging story of the Chinese Lunar New Year. The Chinese Korean boy tells us, in a funny, fresh, first-person voice, how his best friends, a German French boy and a Hopi Mexican girl, like to celebrate the Chinese New Year, too. Yangsook Choi's artfully composed, action-packed paintings add uplifting color to the happy spirit of the holiday, and an author's note provides more details about the Chinese New Year and Wong's childhood memories of the celebration. This delightful picture book makes a fine addition to the small collection of Chinese New Year books, distinguishing itself with the narrator's endearingly persistent quest for luck: "They say you are coming into money / when your palms itch, / and my palms have been itching for days. / My brother thinks it's warts, / but I know luck is coming." (Ages 4 to 8) —Emilie Coulter

PreSchool-Grade 2. Wong carefully and clearly presents the reasons behind the rituals in a manner understandable to young children. She explains in an appended note about her own confusion as a child about the timing and meaning of the holiday. Choi's vibrant...paintings realistically capture the details of and preparations for this hopeful time of year. Youngsters will enjoy the bright colors and the sense of motion and activity conveyed as the boy helps his mother clean, flosses his teeth, and cringes from the noise of the firecrackers. A good choice for anyone getting ready to celebrate Chinese New Year. Anne Connor, Los Angeles Public Library

Ages 4-8. The narrator, who is half Korean, describes how he and his friends, like so many people in a multicultural society, celebrate the holiday with a modern blend of adopted and inherited traditions: the boy's mother makes traditional Korean new year soup; Evelyn, part Hopi and Mexican, loves the money-stuffed red envelopes from her Singaporean neighbor; and Glenn, part French and German, "calls it Chinese New Year, too, even though he celebrates it at his house by eating Thai food to go." At home, the boy cleans the house, "so it can soak up good luck like an empty sponge," grooms himself, and pledges to be brave and positive—"none of that can't do, don't have, why me." Choi's smooth, brightly colored paintings—filled with firecrackers, dragons, and other cultural symbols—ably illustrate the optimistic activity and the yearning in the accessible, rhythmic text. Children of diverse backgrounds will connect with the boy's earnest desire to help change the family's luck and realize his own potential. Gillian Engberg

From The Horn Book

"In a spare, lyrical narrative a Chinese-Korean boy reflects on what the luner new year, otherwise known as Chinese New Year, means to him . . . The concepts of renewal, starting over, and luck, which inform many of the rituals, will resonate with young readers." —The Horn Book