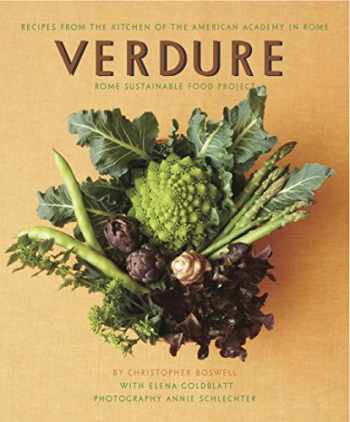 Verdure: Vegetable Recipes from the Kitchen of the American Academy in Rome, Rome Sustainable Food Project

Until 2007, a fellowship at the American Academy in Rome—arguably, the most prestigious prize awarded to archaeologists, painters, architects, scholars, and artists—had one huge drawback: the food. The dining room, ideally a place for Fellows to gather and for disciplines to “cross-pollinate,” was catered by an outside company whose dreadful food was to be avoided at all costs. But when AAR President Chatfield-Taylor asked Alice Waters to help, Waters famously responded, “That depends. What do you want, better food—or a revolution?” Fatefully and without hesitation, Chatfield-Taylor replied, “A revolution.” And a revolution was ignited.

A year later later, the ideals (local, seasonal, organic, sustainable) were implemented and the kitchen was up and running, with Chez Panisse alums Mona Talbott and Christopher Boswell as chefs. In a matter of days, not only were the Fellows filling the tables at lunch and dinner, they were gathered ‘round the blackboard at 11am, anxiously waiting for the daily menus to be posted. The press wasn’t far behind:

“In a town where residents talk a lot about food, the new food at the academy quickly became the talk of Rome, and a dinner invitation became a coveted commodity.”—The New York Times

Seven years later, Verdure is the RSFP’s fourth cookbook (following Biscotti, Zuppe, Pasta). It is perhaps the ideal collaboration among the kitchen and the Academy garden, the artisan producers, and the organic farmers who provide the impeccable raw ingredients used in each dish. (Some are even foraged by the academy’s fellows in field trips to local meadows and forests.) Its 92 recipes are arranged seasonally; week by week, it can be used to navigate the harvest of the farmer’s market. Frugality is a consideration: the RSFP kitchen feeds a group, and cost is a consideration (beans, grains, and greens take a starring role). Maximizing flavor is paramount (consider the lowly onion, risen to new heights in a sweet and sour sauce). Every recipe appears simple and is easy to execute, but rises far, far above the fundamental.