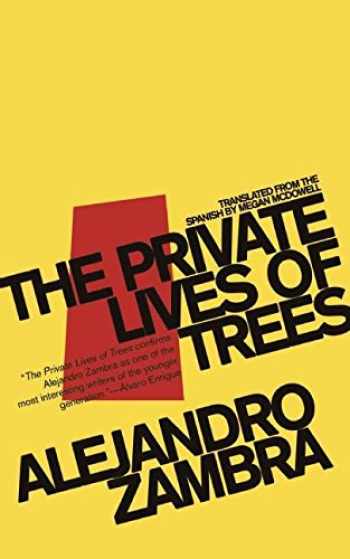 The Private Lives of Trees

Acknowledged authors Zambra, Alejandro wrote The Private Lives of Trees comprising 98 pages back in 2010. Textbook and eTextbook are published under ISBN 1934824240 and 9781934824245. Since then The Private Lives of Trees textbook was available to sell back to BooksRun online for the top buyback price of $ 0.30 or rent at the marketplace.
Show more

"Zambra is indeed the herald of a new wave of Chilean fiction."—Marcela Valdes, The Nation

The Private Lives of Trees tells the story of a single night: a young professor of literature named Julián is reading to his step-daughter Daniela and nervously waiting for his wife Verónica to return from her art class. Each night, Julián has been improvising a story about trees to tell Daniela before she goes to sleep, and each Sunday he works on a novel about a man tending to his bonsai, but something about this night is different. As Julián becomes increasing concerned that Verónica won't return, he reflects on their life together in minute detail, and imagines what Daniela—at twenty, at twenty-five, at thirty years old, without a mother—will think of his novel.

Perhaps even more daring and dizzying than Zambra's magical Bonsai, The Private Lives of Trees demands to be read in a single sitting, and it casts a spell that will bring you back to it again and again.

Alejandro Zambra was named as one of Granta's "Best Young Spanish-language Novelists." He is the author of three novels, including Bonsai, which was made into a film, and Ways of Going Home.

Megan McDowell received her Master's Degree in Literary Translation from the University of Texas at Dallas. In addition to two books by Alejandro Zambra, she has translated Under This Terrible Sun by Carlos Busqued and La Vida Doble by Arturo Fontaine.