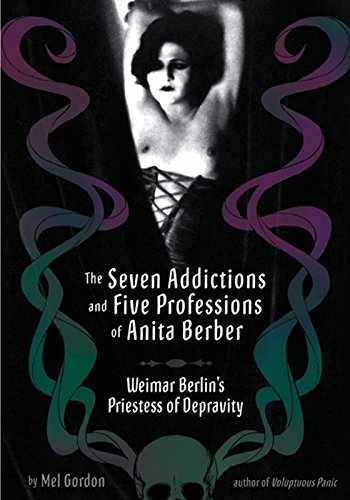 The Seven Addictions and Five Professions of Anita Berber is the first contemporary biography of a notorious actor/dancer/poet/playwright who scandalized sex-obsessed Weimar Berlin during the 1920s.

In an era where everything was permitted, Anita Berber‘s celebrations of “Depravity, Horror and Ecstasy” were condemned and censored. She often haunted Weimar Berlin’s hotel lobbies, nightclubs and casinos, radiantly naked except for an elegant sable wrap, a pet monkey hanging from her neck, and a silver brooch packed with cocaine. Multi-talented Anita saw no boundaries between her personal life and her taboo-shattering performances. As such, she was Europe’s first postmodern woman.

Among those Anita Berber claimed as members of her vast sexual harem were Marlene Dietrich, Magnus Hirschfeld (the founder of modern sexology and gay liberation), Klaus Mann, Conrad Veidt, Lawrence Durrell, and the King of Yugoslavia. Berber acted in Fritz Lang’s Dr. Mabuse: The Gambler and starred in the silent epic, Lucifer. Even Leni Riefenstahl credits Berber for inspiring her controversial career. After sated Berliners finally tired of Anita Berber’s libidinous antics, she became a “carrion soul that even the hyenas ignored,” dying in 1928 at the age of 29.

The Seven Addictions and Five Professions of Anita Berber chronicles a remarkable career, including over 150 photographs and drawings that recreate Anita’s enduring “Repertoire of the Damned.”