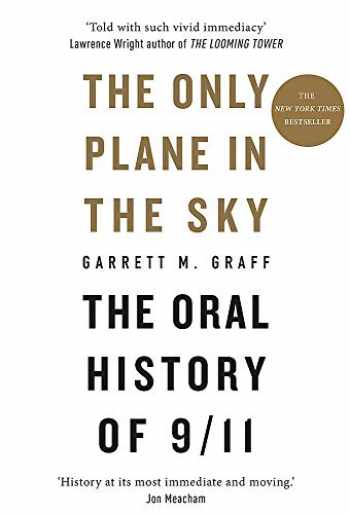 The Only Plane in the Sky: The Oral History of 9/11

"Although many years have passed since 9/11, this book, told with such immediacy, brings so vividly back to mind the shock of that day, and why it continues to shape the tragic history that has followed."
-Lawrence Wright, author of The Looming Tower

"The Only Plane in the Sky is a stunning and important work-chilling, heartbreaking-and I cannot stop thinking about it. To hear the voices of those who survived, and those who did not, it is so moving and powerful. I learned so much and am so thankful for this book."
- Anderson Cooper, anchor, CNN

Of all the books about 9/11 one has been missing until now - a panoramic narrative from the men and women caught up in the unprecedented human drama of that terrible day.

The Only Plane in the Sky is nothing less than the first comprehensive oral history of 9/11, deftly woven and told in the voices of ordinary people grappling with extraordinary events. Drawing on never-before-published transcripts, recently declassified documents, new and archived interviews from nearly five hundred people, historian Garrett Graff skillfully tells the story of the day as it was lived.

It begins in the predawn hours of airports in the Northeast, where we meet the ticket agents who unknowingly usher terrorists onto their flights. In New York, first responders confront a scene of unimaginable chaos at the Twin Towers. From a secret bunker beneath the White House, Dick Cheney and Condoleezza Rice watch for incoming planes on radar. In the offices of the Pentagon, top officials feel the violent tremor as their headquarters come under attack.

We hear the stories of the father and son working on separate floors in the North Tower; the firefighter who rushes to the scene to search for his wife; the telephone operator who keeps her promise to share a passenger's last words with his family; the chaplain who stays on the scene to perform last rites, losing his own life when the Towers collapse; the teachers evacuating terrified children from schools mere blocks from the World Trade Center; the generals at the Pentagon who break down and weep when they are barred from rushing into the burning building to try and rescue their colleagues.

The Only Plane in the Sky is a unique, profound, and searing exploration of humanity on a day that changed the course of history, and all of our lives.