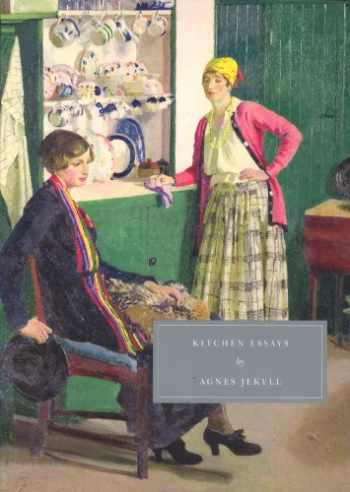 Acknowledged authors Jekyll, Agnes wrote Kitchen Essays (Persephone Classics) comprising 264 pages back in 2009. Textbook and eTextbook are published under ISBN 1906462038 and 9781906462031. Since then Kitchen Essays (Persephone Classics) textbook was available to sell back to BooksRun online for the top buyback price or rent at the marketplace.
Show more

"These essays are noble relics indeed, and Jekyll has the puff-pastry touch."—BookForum

“Kitchen Essays is a rare thing, a cookbook that is as fun to read as its food is to eat.”—Sunday Herald (Glasgow)

First published in The Times (London) during the 1920s, Kitchen Essays explains the proper way to make Lobster Newburg while offering fascinating insight into the social history of England.

Agnes Jekyll felt that cooking should fit the occasion and temperament and states that “a large crayfish or lobster rearing itself menacingly on its tail seems quite at home on a sideboard of a Brighton hotel-de-luxe, but will intimidate a shy guest at a small dinner-party.” And that “a hardy sportsman should not be fed in the same way as a depressed financier.”

Agnes Jekyll (1860–1937) was the daughter of William Graham, Liberal MP for Glasgow and patron of the Pre-Raphaelites. A celebrated hostess and entertainer, her first dinner party included Robert Browning, John Ruskin, and Edward Burne-Jones. She lived in Surrey, England.