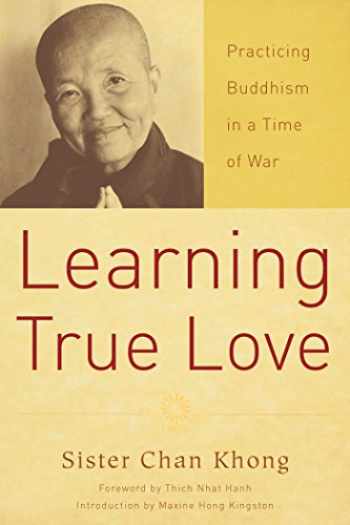 Learning True Love: Practicing Buddhism in a Time of War

Learning True Love, the autobiography of Sister Chân Không, stands alongside the great spiritual autobiographies of our century. It tells the story of her spiritual and personal odyssey, both in her homeland and in exile. Its anecdotal style presents an intensely personal portrait of a woman with astonishing courage, offering us a perspective on the suffering of the Vietnamese people. This unique autobiography tells the gripping story of a woman who not only lived but made history, and whose life of single-minded dedication to humanity can serve as an inspiration for us all.

Sister Chân Không was born in a village on the Mekong River Delta in 1938. In her teens she devoted her life to the development and practice of nonviolence grounded in the Buddhist precepts of non-killing and compassionate action. Propelled by her passionate dedication to social change, she began working in the slums of Saigon, distributing food, working with the sick, and teaching children. When she was 21 years old she met the man who until to this day remains her teacher and spiritual companion: Thich Nhat Hanh. With him she co-founded the School of Youth for Social Service in 1964, which grew to an organization of over 10,000 young people organizing medical, educational, and agricultural facilities in rural Vietnam, and rebuilding villages destroyed in the fighting. Sister Chân Không became well known in the anti-war and peace community for her work promoting human rights and protesting repression and violence, often at risk of her own life. She continues to do this work today.

After the war she became one of the co-founders of Plum Village, the spiritual center, that is home to Thich Nhat Hanh's community in France, where she continues to be deeply involved in the development and vision for this unique community.

In January of 2005, after nearly 40 years in exile, Sister Chân Không was able to return on a 3-month visit to Vietnam. In this fully revised edition of Learning True Love she movingly describes the return to her homeland, the reunions with many old friends and fellow activists, and shares her impression of the "new Vietnam," where Buddhists still struggle for religious freedom and the re-establishment of their own organizations.

Learning True Love is a moving personal memoir, an introduction to the mindfulness teachings and life of Thich Nhat Hanh and his community in exile, an overview to the development of the European and American peace and human rights movement, and an introduction to the engaged and practical style of Vietnamese Buddhism. It documents the process that brought an end to the US Vietnam war, and gives a lively summary of Vietnamese history from 1945 to the current political, social and spiritual climate in Vietnam. Learning True Love also portraits some of the many remarkable people that shared Sister Chân Không 's path.

Foremost however it is the remarkable and impressive story of a very courageous woman, whose journey from an accredited biologist at the University of Paris to a Buddhist nun, gives her unique insight into life's central questions and the ability to address them in an unflinching and straightforward manner.