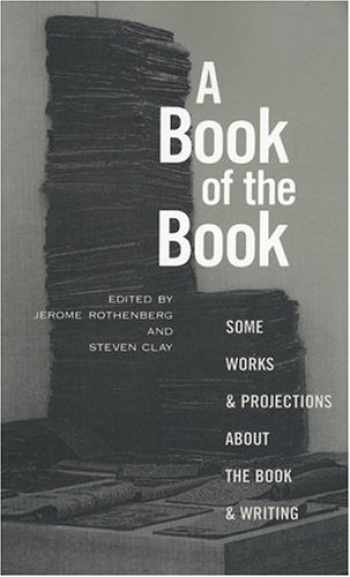 A Book of the Book: Some Works and Projections about the Book & Writing

"A collection for the general reader and the specialist, A Book of the Book is an accessible and erudite set of readings on the book as a mythic and material object. These texts comprise a vivid exploration of the poetics of the book, a multifaceted study nurtured by the literary and ethnographic scope of its editors' vision, that argues compellingly for the continued survival of this most mundane and metaphoric of artifacts. In a moment when irresponsibly inflammatory ravings about the demise of print rage through the cultural landscape, this collection offers serious reflection upon the real profundity of the book as a symbolic force within the poetic and spiritual imagination that remains the wellspring of human culture. Drawn from diverse realms-of avant-garde art, anthropology, textual criticism, literature, and speculative thought-this will be the definitive collection for decades to come-a volume whose very physical presence in the hand performs the rhetoric of its pages in offering its riches to the reader." - Johanna Drucker
A Book of the Book is broken down into four sections: "Pre-faces" includes work by Rothenberg, Steve McCaffery, & bp Nichol, Keith A. Smith, Michael Davidson, Anne Waldman, Jacques Derrida, Edmond Jabès (translated by Rosmarie Waldrop), among others; "The Opening of the Field" includes work by Gertrude Stein, William Blake, Susan Howe, Maurice Blanchot, Marjorie Perloff, André Breton and Jerome McGann among others; "The Book is as Old as Fire & Water" includes work on Guruwari designs, novelty books, pattern poetry, celestial alphabets, among others, while "The Book to Come" presents work by Tom Phillips, Johanna Drucker, Alison Knowles, Charles Bernstein, Jess (a complete re-issue of his 1960 work 'O!'), Ian Hamilton Finlay, Barbara Fahrner and many others.