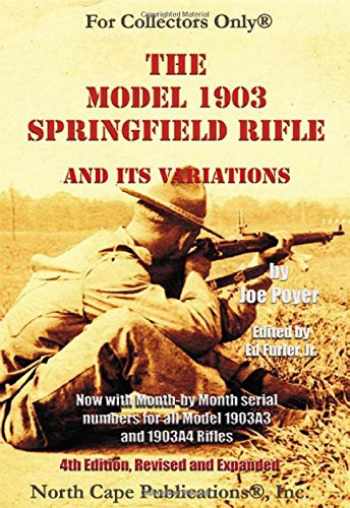 The Model 1903 Springfield Rifle and its Variations, 4th Revised Edition

This new edition includes serial numbers by month for all Model 1903A3 Service .and Model 1903A4 Sniper Rifles.
The Model 1903 Springfield Rifle and its Variations by Joe Poyer Edited by Ed Furler, Jr.

The Model 1903 Springfield Rifle was perhaps the most famous and popular of all U.S. military rifles. First issued in 1903, it served in two world wars and the Korean War and numerous smaller military actions around the globe between in the first half of the 20th Century. It even saw limited service during the War in Vietnam. Today, it is an extremely popular and sought-after military rifle by collectors. A modification of the famous Mauser bolt action, The Model 1903 Springfield was legendary for its accuracy in the hands of a well-trained rifleman. A variation of the rifle developed especially for match shooting held the crown in the National Matches longer than any other rifle. The National Matches have been conducted annually on a nationwide basis since 1873—except in wartime—and involved both civilian and military shooters competing on an equal basis. The matches exerted a great deal of influence on the design of American military rifles and marksmanship training.

“The Model 1903 Springfield Rifle and its Variations” provides a detailed examination of this famous military rifle on a part-by-part basis. Every variation in every part is documented and matched to the serial number range of its use. Thirty-one different variations of the rifle were developed over the 41 year course of its production and all are described and identified.

Twelve different variations of the rifles were developed as sniper rifles beginning in 1907. All are discussed and described as are the telescopic sights used on each. The rifle was produced for civilian shooters by the Springfield national armory as well. Several variations of .30 caliber rifles were developed and sold through the Director, Civilian Marksmanship Program and the National Rifle Association for target shooting and hunting. A range of .22 caliber rimfire rifles was also developed for both low cost military and civilian marksmanship training in the 1920s and 1930s.

During World War II, to meet the needs of a 12 million man military force, the Remington Arms Company and the Smith Corona Typewriter Company produced more than 1.8 million Model 1903A3 rifles including the Remington-manufactured Model 1903A4 sniper rifle.

Appendices provide additional information on serial numbers, production numbers by month for all variations including the Model 1903A3 and Model 1903A4, ammunition, inspection procedures and markings, lists of military and civilian inspectors and their markings, the National Match rifle and the rare and highly classified Pedersen device that converted this bolt action rifle to a semiautomatic rifle during World War I with never-before published original factory photos. A thorough bibliography completes the text.

“The Model 1903 Springfield Rifle and its Variations,” is the fifteenth book in the North Cape Publication’s “For Collectors Only” series for beginning and advanced firearm’s collectors and the twenty-third book on their list. This book is a complete compilation and discussion of all variations of this famous rifle.

“The Model 1903 Springfield Rifle and its Variations” is 456 pages long with six color plates and hundreds of black and white drawings and photos. Format is perfect bound, 8.5 x 5.5 inches. Every part is illustrated in detail either in a drawing or photo. As the book covers the entire range of the Model 1903 rifle from the rod bayonet to the M1903A4 sniper rifle.