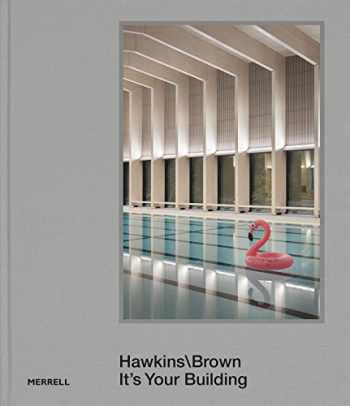 Hawkins\Brown: It's Your Building

Acknowledged authors Pearman, Hugh wrote Hawkins\Brown: It's Your Building comprising 208 pages back in 2018. Textbook and eTextbook are published under ISBN 1858946689 and 9781858946689. Since then Hawkins\Brown: It's Your Building textbook was available to sell back to BooksRun online for the top buyback price or rent at the marketplace.
Show more

The award-winning architectural practice Hawkins\Brown, founded in 1988, is well-known for its thoughtful, innovative, and sustainable new buildings and refurbishments of all types. The practice prides itself on bringing a fresh and collaborative approach, creating places that are well-made, well-used, and well-loved. This new book examines 14 of its projects in detail, interspersed with essays on various themes by members of the practice.


The book begins with an examination by the eminent architecture journalist Hugh Pearman of the founding, history, and approach of Hawkins\Brown, based on personal interviews with the practice’s two founding principals, Roger Hawkins and Russell Brown.


A full discussion of the projects follows, each comprehensively illustrated with photographs, plans, and renderings. The Bartlett School of Architecture in London had been outgrown by the School; it has been stripped back and reconfigured to create a building that staff and students alike are delighted to use. The Corby Cube is a well-equipped, multi-purpose civic and cultural centre that is beloved of this East Midlands town’s inhabitants. Here East, the repurposing of the Olympic press and broadcast centres in east London into space for creative and digital industries, is an excellent example of collaboration between client, architect, and stakeholders. At Hilden Grange Preparatory School in Kent, Hawkins\Brown slotted exemplary new teaching spaces into natural woodland in a sustainable and sympathetic way. The University of East Anglia’s Bob Champion Building is part of the Norwich Medical School’s vision to become a world leader in clinical research and teaching, and was completed in less than a year. Park Hill housing estate in Sheffield, northern England, has been updated with a charismatic new facade treatment and revitalized apartments, taking it from eyesore to icon. Another housing estate, Peabody Burridge Gardens in southwest London, has been rebuilt completely, and is now more pleasant and better integrated. Tottenham Court Road station in central London – part of the enormous Crossrail project – has been sympathetically but radically redesigned to provide for the extra people who will use it, and includes artworks by Daniel Buren, Richard Wright, and Douglas Gordon. At Hackney Town Hall in east London, the refurbishment of an important art deco building required all numerous skills, from reuse and repair to conversion and conservation. A combined refurbishment and new building on Great Suffolk Street just south of the river in central London, meanwhile, has created an expanded commercial building that sits comfortably in its semi-industrial setting. For the City of London Freemen’s School in Surrey, Hawkins\Brown created a new swimming pool that is simultaneously functional, beautiful, and sympathetic to its rural location. With the University of Oxford Beecroft Building – where environment is also deeply important – the practice produced a new Physics research facility that both satisfies the city’s stringent historical and conservation controls and is a genuinely groundbreaking scientific building. East Village Plot No. 6 is a ‘build-to-rent’ development in Stratford, east London, where architecture has been used to create community. Finally, the Thames Tideway Tunnel is a crucial yet little-known infrastructure project that will extend and modernize London’s sewerage system to cope with future demand. The visible architecture here involves various surface points along the river, including at Chelsea Embankment and at Blackfriars.


The essays demonstrate Hawkins\Brown’s pride in the input of its staff. Seth Rutt explains the architect’s desire for creative autonomy and wish to follow the process of creating a new building all the way from designing it to supervising the construction. Darryl Chen explains the importance of taking time away from day-to-day work to focus on broader themes, and introduces the practice’s own think tank. Nicola Rutt discusses the importance of refurbishment in the output of the practice, emphasizing its importance to the urban fabric and to the people who inhabit our towns and cities. Morag Morrison writes about the integration of art with architecture, and Katie Tonkinson examines mixed-use architecture in the context of the architect’s approach rather than the client’s brief. Harbinder Birdi explains the importance of urban planning and considering the human context for all projects, and, finally, Oliver Milton and Jack Stewart celebrate the opportunities afforded by new technology.