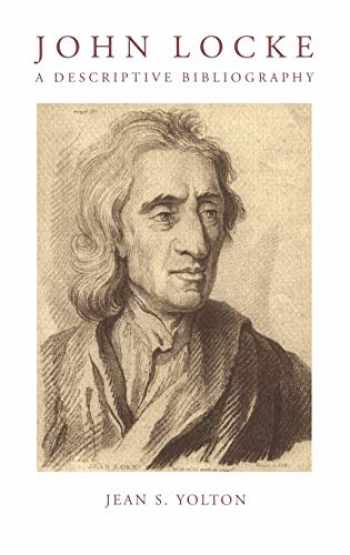 "...it is a genuine pleasure to state that here for once is a volume that is truly a consummation of a lifetime's work and that really will be the definitive book in its field for many years to come....the publishers have made the presentation as good in its way as the contents: which is high praise indeed."Ian Harris—The British Journal for the History of Philosophy

"Jean Yolton's bibliography of John Locke, completed over a period of more than twenty years, is based on an examination of an unprecedented number of copies of Locke's works in major libraries and private collections all over Europe and north America. The result is the most comprehensive bibliographical examination accorded any major English-speaking philosopher, the publication of which will mark a landmark in both Locke scholarship and bibliographical research."—G.A.J. Rogers, Editor, British Journal for the History of Philosophy

It is difficult to imagine a book of more use to Locke scholarship than Jean S. Yolton's John Locke: A Descriptive Bibliography...As a reference tool, however, Yolton's bibliography will become the standard guide.—Mark G. Spencer, Eighteenth-Century Studies Volume 34, Number 4, Summer 2001

Jean Yolton is a professional librarian who was a cataloguer at the Robarts Library of the University of Toronto, and Rare Books Cataloguer at the Van Pelt Library, University of Pennsylvania. She and her husband, John, are recognized as leading Locke scholars and have, between them, published a variety of books on Locke, including their authoritative work, Locke: A Reference Guide and a critical edition of Locke's Some Thoughts Concerning Education (1989). Jean is also editor of A Locke Miscellany (1990).

Compiled by Jean S. Yolton over the last twenty years, it includes the publishing history of all known editions and translations, as well as material published in journals, and posthumous materials whenever published. Separate sections are devoted to a chronology of Locke's life, with special emphasis on dates of composition and publication; doubtful and false attributions of his authorship; a brief listing of criticism through 1800; and numerous indexes. The enormous research includes the study of copies in some seventy-five libraries in the British Isles, Europe and North America; exemplars on record at other libraries, chiefly in the former East Germany, are also recorded.