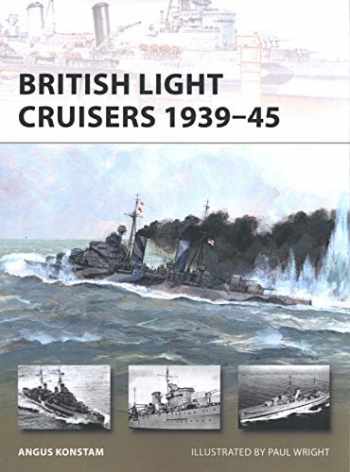 Acknowledged authors Konstam, Angus wrote British Light Cruisers 1939–45 (New Vanguard) comprising 48 pages back in 2012. Textbook and eTextbook are published under ISBN 1849086842 and 9781849086844. Since then British Light Cruisers 1939–45 (New Vanguard) textbook was available to sell back to BooksRun online for the top buyback price of $ 0.64 or rent at the marketplace.
Show more

The light cruiser was a natural development of the sailing frigate - a fast multi-purpose warship that could patrol the sea lanes, protect convoys and scout for enemy battle fleets. By the inter-war period the need for this type of ship was even more important, given the increasing need for protection from aircraft, and the need to screen the fleet from submarines or destroyers.

During the 1930's a new group of British light cruisers were commissioned, designed to replace an earlier generation of warships designed during the Great War. These new ships were sleek, fast, and relied on the 6-inch gun - a tried and tested weapon that combined hitting power with a high rate of fire. A second generation of light cruisers followed during the late 1930's, armed with twelve 6-inch guns apiece. One of these - HMS Belfast - is still afloat today.

Finally the threat posed by German aircraft led to the conversion of some older warships into anti-aircraft cruisers - a stopgap measure until a new class of these powerful and much-needed warships entered service. By this time wartime experience had shown that the British light cruiser was one of the most versatile types of ship in the Royal Navy, able to protect other warships, bombard enemy shores, guard life-saving convoys and intercept and destroy enemy warships. These were truly the workhorses of the wartime Royal Navy. While the battleships and carriers grabbed the headlines, these sleek, elegant warships quietly got on with the job of securing control of the seas.