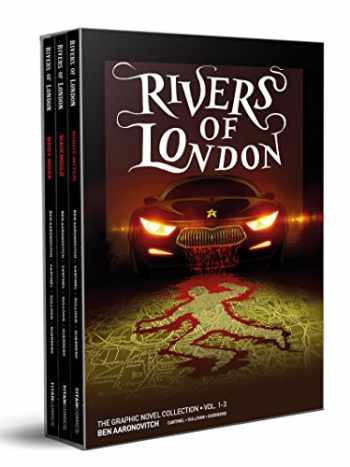 Acknowledged authors Aaronovitch, Ben, Cartmel, Andrew wrote Rivers of London: 1-3 Boxed Set comprising pages back in 2018. Textbook and eTextbook are published under ISBN 1785869302 and 9781785869303. Since then Rivers of London: 1-3 Boxed Set textbook was available to sell back to BooksRun online for the top buyback price of $ 12.48 or rent at the marketplace.
Show more

Dive in at the beginning of the bestselling cops and wizards series from chart-topping author (and comics writer) Ben Aaronovitch, with this Box Set Edition of the first three graphic novels! Including Art Cards featuring the cover art from the individual books. Including: Volume 1: Bodywork, Volume 2: Night Witch, Volume 3: Black Mould

A stunning box set edition of the bestselling first three graphic novels in the Rivers of London sequence, starring Ben Aaronovitch's laconic trainee wizard and budding detective, Peter Grant. All-new adventures for Peter and the Folly - that are essential parts of the smash-hit novel continuity! Peter Grant is part of a very special London police unit. Full-time cop and part-time wizard, he works on rather unusual crimes - those that involve magic and the general weirdness that permeates London's dark underbelly.
In the first volume, Body Work, Police Constable Peter Grant and his boss, Thomas Nightingale, London's only wizarding cops, tackle a case that begins with a perfectly innocent car on a homicidal killing spree - without a driver. But then, before you know it, there's a Bosnian refugee, the Most Haunted Car in England, a bunch of teenagers loaded on Ketamine and a seemingly-harmless wooden bench with the darkest of pasts...
In the second volume, Night Witch, Peter and Nightingale are press-ganged into helping a Russian oligarch hunt his missing daughter, where they are caught up in a battle between Russian gunmen, a monstrous forest creature - and their nemesis: The Faceless Man. But as Grant and Nightingale close in on the missing girl, they discover that nothing about this case is what it seems!
In the third volume, Black Mould, something dark and slimy is dripping through the walls of suburban London. Not the usual stuff that smells funny and can be hell on the lungs, this mould is possessed by dark power and worse intentions. Looks like it's another case for London's one and only trainee wizard cop, Peter Grant, joined here by his reluctant partner, Sahra Guleed!
Show more