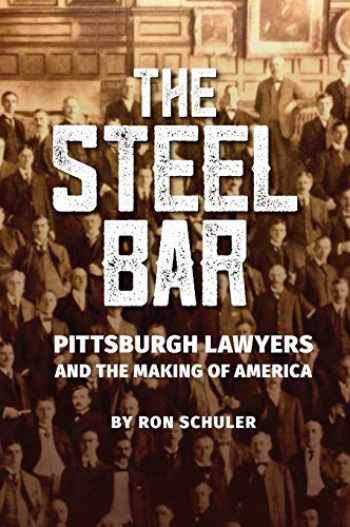 The Steel Bar: Pittsburgh Lawyers and the Making of America

Within a "Nation of Laws," come to the birthplace of America's industrial might, and see a Nation, testing and being tested by its Laws--in city streets, in factories and boardrooms, and occasionally even in courtrooms.

"Ron Schuler's THE STEEL BAR is a magnificent tour-de-force It weaves together history, law and powerful story-telling to produce a dramatic, readable account of the people and unexpected forces that shaped our nation's legal system. This book belongs on the shelf of any serious student of law, history, and the role played by the bench and bar in forging America's remarkable destiny."

"[A] thoroughly researched and easily readable account of an untold story. Schuler takes the microcosm of the Pittsburgh legal community ... to illustrate far broader social themes about the rule of law."

"[T]he best and most engaging history of a city bar that I've read in many years. Far from being just another chronicle of a local profession, THE STEEL BAR shows how Pittsburgh lawyers played leading roles in the development of national politics, economic growth and social change. It's a great story written with verve, panache and wit that properly puts Pittsburgh at the center of the American narrative."

The definitive history of the legal profession in Pittsburgh, ten years in the making, THE STEEL BAR: PITTSBURGH LAWYERS AND THE MAKING OF AMERICA examines Pittsburgh's part in the development of American democratic and commercial institutions and how its lawyers helped to shape American history in significant ways.

During Pittsburgh's earliest days, Pittsburgh lawyers living as outsiders on the frontier of America were actively defining the limits of political dissent in the young Republic. By 1902, however, Pittsburgh lawyers occupied top spots in all three branches of government at the same time: as U.S. attorney general and solicitor general, as a justice on the U.S. Supreme Court, and as a member of the powerful House Ways and Means Committee. Not merely a coincidence, by the end of the nineteenth century Pittsburgh lawyers were considered to be among the Nation's most influential--for their roles in the rise of Pittsburgh as the wealthiest and most important industrial city in America, as interpreters and curators of the earliest major American corporations, and as tacticians in the ongoing struggles between labor and management. During the Progressive Era and the rise of federal regulation, Pittsburgh lawyers fought epic battles against the government over the right to collective bargaining, the limits of monopoly power and local government self-determination. At the same time, the profession itself evolved in Pittsburgh, through wars and McCarthyism, the Civil Rights era and globalism, and through the democratization of the bar and the entry of women and minorities into the front ranks of the profession, as Pittsburgh's lawyers stepped forward to become stewards and builders during the decline of Steel and the renaissance of a great American city.