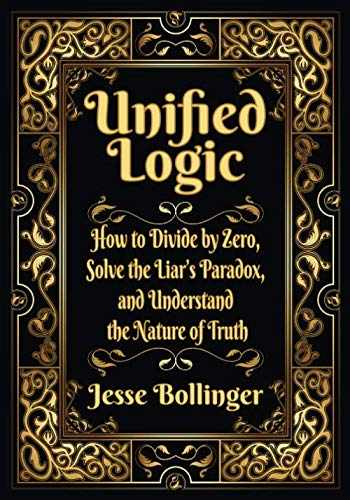 Unified Logic: How to Divide by Zero, Solve the Liar's Paradox, and Understand the Nature of Truth

A #1 New Release in the logic category on Amazon in 2018, now updated for 2019 with many minor improvements!

The special content in this ebook is carefully preserved in a fixed non-reflowable format. This prevents figures, tables, and formulas from misbehaving.

Discover surprising new solutions to legendary paradoxes once thought to be unsolvable. Master the fundamental underlying principles of logic and acquire a more intuitive and natural grasp of how to reason correctly. Free your mind from the daily fog of irrationality and misinformation by empowering yourself with the guiding light of logic.

It's about reimagining and reexamining the foundations of logic to uncover hidden insights and bizarre new possibilities. It's a journey into the uncharted wilderness of reason, a strange new landscape where the rules can bend in wonderfully unexpected and arbitrary ways.

This book is designed with both beginners and experts in mind. It's written in a conversational, free-flowing, and accessible style, and doesn't shy away from exploring lots of interesting tangential thoughts and useful ideas.

Here are just a few of the things you'll find inside:

Don't underestimate yourself. Investing in learning logic is worth it. Broaden your perspective by exploring some fresh new perspectives! It may help inspire some new ideas of your own too!

This ebook is best read on a desktop PC or tablet. Phones will also work but may be hard to read. The book does NOT work on glare-free devices such as Kindle, Kindle Paperwhite, or Kindle Oasis.