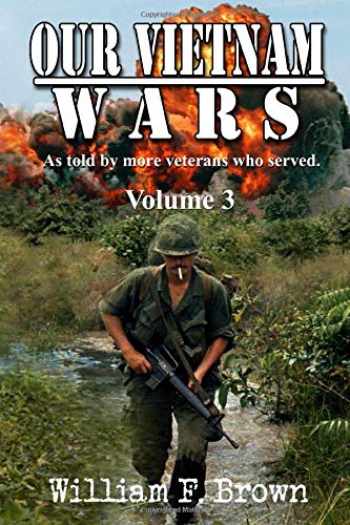 Our Vietnam Wars, Vol 3: as told by still more veterans who served

Want to know what the Vietnam War was really like? These are true stories from real people caught up in an all too real war. They tell who we were, our jobs and memories of the place, and what we did after we came home. From a Marine ambulance driver at Khe Sanh, Special Ops troops fighting a guerrilla war against the VC and NVA, Recon pilots, artillerymen on Christmas Eve, a Navy seaman below decks fighting a catastrophic fire on the USS Oriskany, a New Zealand artillery unit firing round after round to stop an NVA assault, Marine Corpsmen saving the wounded under fire, patrolling the jungle with New Zealand infantry, walking into Khe Sanh with the 1st Cav as they broke the siege, riding in an APC with the armored cav across the hills in I Corps, being shot down in Cambodia with a Huey pilot, plus cooks, clerks, truck drivers, and gunship pilots, combat medics, and Marine grunts and many more -- from the Delta to the DMZ and Thailand to the South China Sea, this book puts you in their boots. While most Vietnam War books only cover one guy, one unit, one place, and one year, Volume 1, Volume 2, and now Volume 3 span all the war years from 1962 to 1975. Some of us were drafted. Some enlisted. Some were legit war heroes, but most were just trying to survive. As everyone “in-country” knew, Vietnam mostly came down to luck, good or bad. If you were there, you understand. If you weren’t, grab a copy and start reading anywhere in the book. The stories are like Doritos. Try a few. I guarantee and you won’t be able to stop.