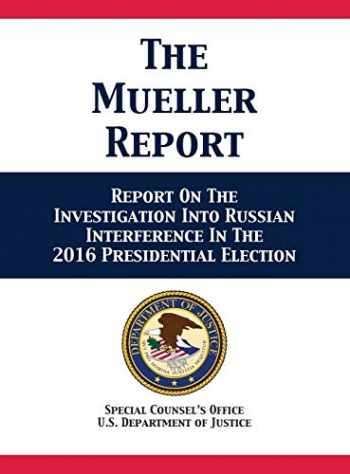 The Mueller Report: Report On The Investigation Into Russian Interference In The 2016 Presidential Election

This book contains entire The Mueller Report, both Volumes I and II (despite what the one-star reviewer states). This report is officially known as the Report On The Investigation Into Russian Interference In The 2016 Presidential Election as submitted by the Special Counsel's office to Attorney General William Barr on March 22, 2019. This is a copy of the original version as released on April 18th, 2019, with redactions.

The Special Counsel investigation of 2017 to 2019, also referred to as the Mueller probe, Mueller investigation and Russia investigation, was a United States counterintelligence investigation of the Russian government's efforts to interfere in the 2016 presidential election. According to its authorizing document, which was signed by Deputy Attorney General Rod Rosenstein on May 17, 2017, the investigation's scope included allegations that there were links or coordination between Donald Trump's presidential campaign and the Russian government as well as "any matters that arose or may arise directly from the investigation." It included a criminal investigation which looked into potential obstruction of justice charges against Trump and others within the campaign and administration. Conducted by the Department of Justice Special Counsel's Office headed by Robert Mueller, a Republican and former Director of the Federal Bureau of Investigation (FBI), the Special Counsel investigation began eight days after President Trump dismissed FBI director James Comey, who had been leading existing FBI investigations since July 2016 into links between Trump associates and Russian officials. Following Comey's firing, over 130 Democratic Party lawmakers in Congress called for the appointment of a special counsel, while the FBI began investigating Trump for obstruction of justice. The special counsel's office took over both these investigations from the FBI.

The Special Counsel's office concluded its investigation and submitted the final report (also known as "the Mueller report") to Attorney General William Barr on March 22, 2019. Barr had been previously critical of the investigation before Trump announced on December 7, 2018, his intent to nominate Barr for Attorney General. Following the conclusion of the special counsel, at least three dozen ongoing investigations originally handled by the Special Counsel's office were passed on to district and state prosecutors, other Department of Justice branches, other federal agencies, and Congress. Source: Wikipedia