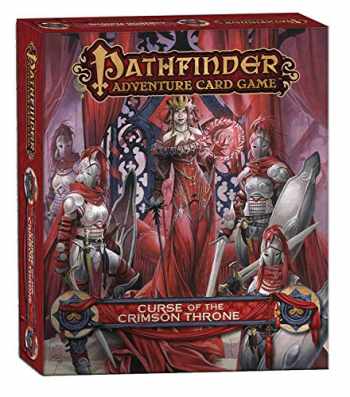 The King Is Dead. Long Live the Queen!

Korvosa is cursed that none of its monarchs shall ever die of old age or produce an heir. The metropolis teeters on the edge of anarchy. It needs heroes that can face down crime lords, rioting mobs, insane cultists, virulent plague, undead hordes, scheming devils, corrupt nobles, barbarian chieftains, and ancient and forgotten evils that seek to dominate and plunder the city.

This expansion to the popular cooperative strategy game pits 1 to 6 players against monsters, perils, and traps as you save the city of Korvosa from threats both ancient and new. Choose your character; build a deck of unique equipment, magic, and allies; and explore lethal locations as you journey through an exciting fantasy tale. As your adventures continue, your characters will add remarkable gear and breathtaking magic to their decks. They'll also gain incredible powers, which they'll need to challenge more and more powerful threats.
This set includes the storybook and cards for the Curse of the Crimson Throne Adventure Path. It requires the Pathfinder Adventure Card Game Core Set and expands the maximum number of players to 6 for that set. You can supplement your experience with Character Decks, the Pathfinder Adventure Card Society, and Pathfinder Adventure Card Game accessories (available separately).