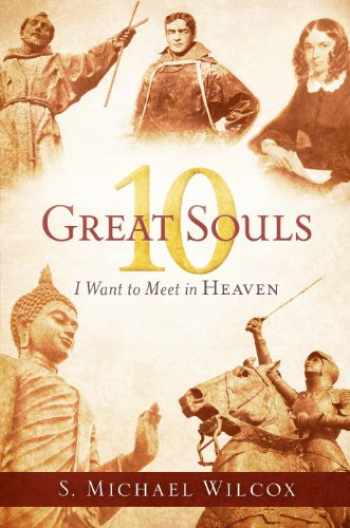 10 Great Souls I Want to Meet in Heaven

Mormon's teaching to "lay hold upon every good thing" and the Doctrine and Covenant's injunction to "seek ye out of the best books words of wisdom" serve as an invitation to study truth from all cultures and all people. From great individuals of the past we gain valuable insights and cultural perspectives, and we are inspired by their triumphs over life's challenges.

In 10 Great Souls I Want to Meet in Heaven, author S. Michael Wilcox profiles the lives of his "best friends history," ten individuals who have tutored his soul as well as his mind and whom he wants to meet in the hereafter.

The list includes Saint Patrick, the slave who was not Irish; Saint Francis of Assisi, the son of a wealthy Italian merchant who became a Catholic friar; Joan of Arc, a French peasant who became a national heroine; Mencius, a Chinese philosopher; Khadija and Aisha, wives of and helpmeets to the prophet Mohammad; Siddhartha, who became the Buddha; Charles Darwin, the English scientist and naturalist; Sir Ernest Shackleton, who spend much of his life as a polar explorer; George MacDonald, the Scottish author, poet, and Christian minister who inspired, among others, C.S. Lewis; and Elizabeth Barrett Browning, the prominent English poet, whose love for her husband, Robert Browning, and its reciprocation, are the stuff of Legend.