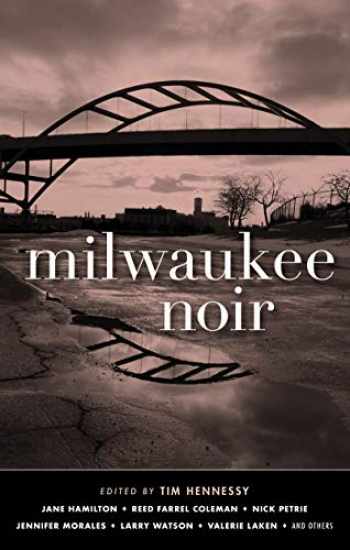 Derrick Harriell has received the Robert L. Fish Memorial Award for his story, "There's a Riot Goin' On," presented by the Mystery Writers of America.

"Luxuriate in the seedy, wallow in the angry and shiver at the horrors that surely await you around the corner...The sheer localness of Milwaukee Noir is superb, and the seediness of many characters here would qualify them for membership in a Tom Waits song."
--Milwuakee Journal Sentinel

"In Milwaukee Noir, among the latest titles in Akashic Books' Noir series, 14 writers who've lived here offer a sinister tour of Brew City's radically diverse neighborhoods...Many of these pieces...work effectively not only as atmospheric fiction but also as influential social commentary."
--Shepherd Express

"Noir exposes the underbelly of a place. In film or fiction, characters live in the shadows, denizens of a night where every good intention is punished. Noir found its natural home in New York City and LA in the 1940s and '50s. Now, Milwaukee can lay claim to its own piece of the genre."
--Lake Effect (WUWM 89.7 FM, Milwaukee)

Akashic Books continues its award-winning series of original noir anthologies, launched in 2004 with Brooklyn Noir. Each book comprises all new stories, each one set in a distinct neighborhood or location within the respective city.

From the introduction by Tim Hennessy:

Presently, Milwaukee is going through a renaissance--abandoned factories being converted to condos, craft breweries and distilleries pushing out corner taverns--yet at the same time it is among the most segregated and impoverished big cities in the country. The gentrification of neighborhoods outside of downtown bear the impact of twentieth-century redlining efforts, forcing residents out due to housing demand, adding fuel to the affordable-housing crisis. Such an environment and atmosphere make excellent fodder for noir fiction...

The book you're holding is the first of its kind--a short fiction collection about Milwaukee, by writers who've experienced life here. The crime/noir genre at its best can be one of the purest forms of social commentary. I've gathered contributors who can tell not just a fine story, but who can write about the struggles and resilience of the people who live here...I'm honored to compile a body of work that represents what I love, and fear, about Milwaukee. I love my city's lack of pretension; its stubbornness and pride in the unpolished corners. I fear that my city faces an uncertain future--that as it becomes more divided it may pushes our best and brightest to find somewhere else to shine.