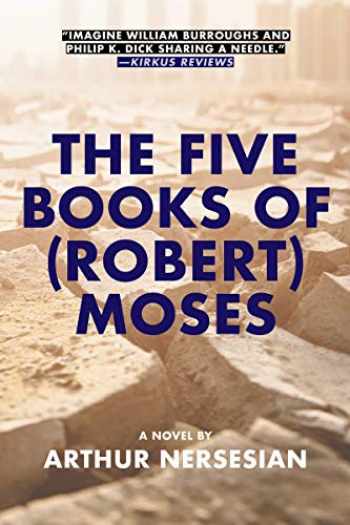 The Five Books of (Robert) Moses

"Nersesian is one of my favorite New York authors; this tome is one to lose yourself in."
--Bob Odenkirk, actor, Breaking Bad

"The unquestioned authority of Robert Moses is difficult to fully grasp today--this unimaginable, outsized character whose outrageous deeds seem the stuff of novels. And that is how Nersesian is tackling him, by blending fact with fiction. Historical events and persons are interwoven with a fascinating apocalyptic story and literary license, at last revealing the tumultuous life and legacy of Robert Moses. Faced with such a daunting subject matter...Nersesian's narrative is masterful."
--Brooklyn Eagle

"Imagine Kurt Vonnegut channeling the Book of Revelations and transmitting it to the faithful of a postcataclysmic New York City and you get a glimpse of the monumental literary feat Arthur Nersesian has accomplished...It is imaginative, frightening, and hilarious, often all at the same time."
--Michael Imperioli, author of The Perfume Burned His Eyes

"Arthur Nersesian's fantastical magnum opus is both a love song to the vibrant culture of 'old' New York City and a cautionary commentary on the rampant political opportunism of the twenty-first century. As meticulously plotted as the best Stephen King novels, with world-building that might arouse jealousy in Philip K. Dick, The Five Books of (Robert) Moses shows us why Nersesian has established himself as one of New York City's most vital chroniclers."
--T Cooper, author of Real Man Adventures and the Changers YA series

After a domestic terrorist unleashes a dirty bomb in Manhattan in 1970, making the borough uninhabitable, FBI agent Uli Sarkisian finds himself in a world that is suddenly unrecognizable, as the United States faces its greatest immigration crisis ever: finding housing for millions of its own citizens. The federal government hastily retrofits an abandoned government installation in the Nevada desert. Despite the government's best intentions, as the military pulls out of "Rescue City," the residents are increasingly left to their own devices, and tribal gang warfare fuses with democracy, forming a frightening new political system: the gangocracy.

The Five Books of (Robert) Moses alternates between the outrageous present of Rescue City and earlier in the twentieth century, detailing the events leading up to the destruction of Manhattan. We simultaneously follow legendary urban planner Robert Moses through his early years and are introduced to his equally ambitious if somewhat unbalanced older brother Paul, a brilliant electrical engineer whose jealousy toward Robert and anger at the devastation caused by the man's urban "renewal" projects leads to a dire outcome.

Arthur Nersesian's most important work to date examines the political chaos of today's world through the lens of the past. Fictional versions of real historical figures populate the pages, including Allen Ginsberg, Abbie Hoffman, and many more.