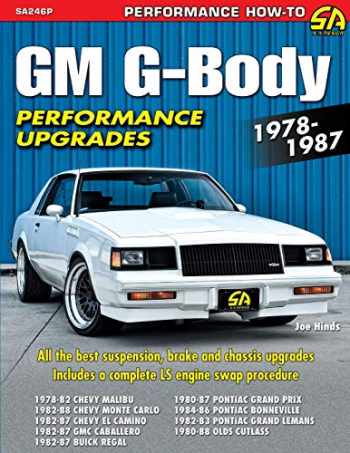 The photos in this edition are black and white.

The General Motors G-Body is one of the manufacturer's most popular chassis, and includes cars such as Chevrolet Malibu, Monte Carlo, and El Camino; the Buick Regal, Grand National, and GNX; the Oldsmobile Cutlass Supreme; the Pontiac Grand Prix, and more. This traditional and affordable front engine/rear-wheel-drive design lends itself to common upgrades and modifications for a wide range of high-performance applications, from drag racing to road racing. Many of the vehicles GM produced using this chassis were powered by V-8 engines, and others had popular turbocharged V-6 configurations. Some of the special-edition vehicles were outfitted with exclusive performance upgrades, which can be easily adapted to other G-Body vehicles.

Knowing which vehicles were equipped with which options, and how to best incorporate all the best-possible equipment is thoroughly covered in this book. A solid collection of upgrades including brakes, suspension, and the installation of GMs most popular modern engine-the LS-Series V-8-are all covered in great detail. The aftermarket support for this chassis is huge, and the interchangeability and affordability are a big reason for its popularity. It's the last mass-produced V-8/rear-drive chassis that enthusiasts can afford and readily modify.

There is also great information for use when shopping for a G-Body, including what areas to be aware of or check for possible corrosion, what options to look for, and what should be avoided. No other book on the performance aspects of a GM G-Body has been published until now, and this book will serve as the bible to G-Body enthusiasts for years to come.