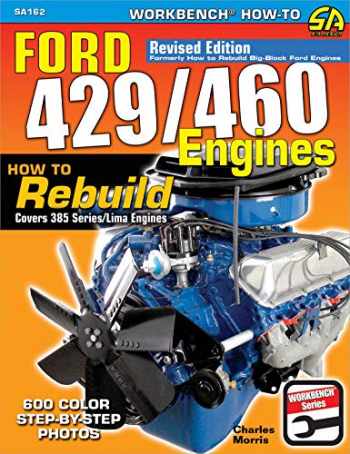 Get your Ford and its 385 Series 429- or 460-ci big-block engine, also known as the Lima engine, back in action using this comprehensive rebuilding guide.

In this revised edition of How to Rebuild Big-Block Ford Engines, now titled Ford 429/460 Engines: How to Rebuild, Ford expert Charles Morris covers all the procedures, processes, and techniques required to rebuild your powerplant. Step-by-step text provides details for determining whether your engine actually needs a rebuild, preparation and removal, disassembly, inspection, cleaning, machining and parts selection, reassembly, start-up, and tuning.

Also included is a chapter on building the special Boss 429 engines, as well as a bonus chapter on the Ford 351 Cleveland, Ford’s little brother to the big-block.

Ford was unique in that it had two very different big-block engine designs during the height of the muscle car era. The original FE engine design was pioneered in the late 1950s, primarily as a more powerful replacement for the dated Y-block design. What began as a torquey engine meant to move heavyweight sedans morphed into screaming high-performance mill that won Le Mans and drag racing championships throughout the 1960s.

By the late 1960s, the FE design was dated, so Ford replaced it with the 385 series in displacements of 429 and 460 ci, which was similar to the canted-valve Cleveland design being pioneered at the same time. It didn’t share the FE pedigree of racing success, mostly due to timing, but the new design was better in almost every way; it exists via Ford Motorsports’ offerings to this day.

Beginning in 1971, the 429 found its way between the fenders of Mustangs and Torinos in high-compression 4-barrel versions called the Cobra Jet and Super Cobra Jet, and it was one of the most powerful passenger car engines that Ford had ever built. If the muscle car era had not died out shortly after the release of these powerful engines, without a doubt, the 429 performance variants would be ranked with the legendary big-blocks of all time.

If you are planning to rebuild a Ford 429 or 460 engine, are in the process of a rebuild, or just want to learn more about Ford’s storied engines, this book is a must-have item for your shelf.