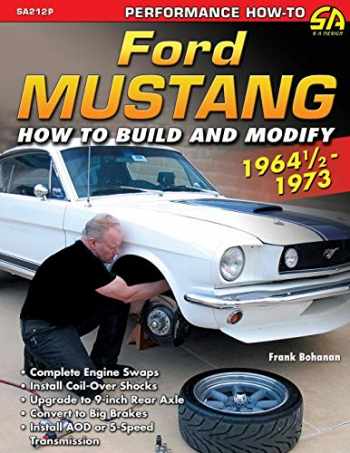 The photos in this edition are black and white.

The Mustang is an automotive icon with more than two million cars built between 1964-1973. Mustangs, such as the Shelby GT350 and GT500, Mach 1 428 Cobra Jet and Boss 302 and 429 ruled the street, but many thousands of common six cylinder and small V-8 Mustangs hit the highways and byways as well. These 40-plus-year-old cars use antiquated equipment that includes drum brakes, breaker point ignition systems, and 14-inch skinny steel wheels. The OEM running gear is obsolete by today's standards and all of these Mustangs can be transformed into high-performance street machines that can compete with late-model Mustangs.

While some owners choose to preserve their Mustangs through an original restoration, other owners have upgraded their Mustangs into true driving machines by installing aftermarket suspension, steering, and driveline technology. Many owners have performed bolt-on upgrades that don't affect originality, while other owners have completed more extensive projects that modify and seriously upgrade these cars. Included in this book is information about installing a crate engine, big high-performance brake kits, coil-over shocks, tubular A-arms and so many other projects that increase performance by leaps and bounds.

From mild to wild, this book covers every component group of the car including engine, transmission, rear differential, front suspension, rear suspension, steering, chassis, electrics, interior, and more. Following the information in this book, you can build a high-performance street car as well as a track car. In no other book will you find the information to comprehensively transform the classic Mustang into a car that performs with the best on the road today.