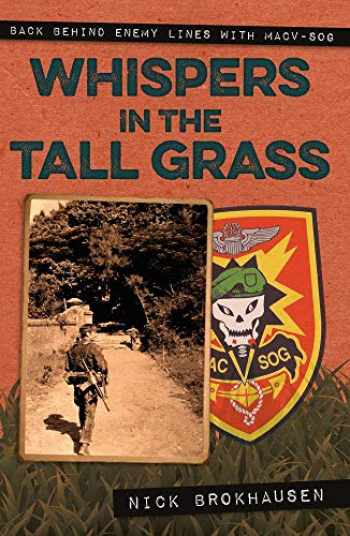 Whispers in the Tall Grass

Acknowledged authors Brokhausen, Nick wrote Whispers in the Tall Grass comprising 216 pages back in 2019. Textbook and eTextbook are published under ISBN 1612007759 and 9781612007755. Since then Whispers in the Tall Grass textbook was available to sell back to BooksRun online for the top buyback price of $ 3.93 or rent at the marketplace.
Show more

Whispers in the Tall Grass is the second volume of Nick Brokhausen’s riveting memoir of his time serving in Recon Teams Habu and Crusader, CNN, part of MACV-SOG. These small recon teams, comprising Americans and indigenous Montagnards, conducted some of the most dangerous missions of the war, infiltrating areas controlled by the North Vietnamese in Laos, Vietnam, and Cambodia.

Picking up where We Few left off, Whispers in the Tall Grass opens as the war moves into a new phase. The enemy are using special formations to hunt recon teams and missions are now rarely accomplished without heavy contact. Despite the teams’ careful prep, losses are mounting. More and more missions are extracted by Bright Lights until eventually classic recon missions are almost impossible, and the teams briefly trial HALO insertion. Finally, as the US prepares to withdraw, the teams undertake back-to-back missions directing air strikes and disrupting supply lines to ease the pressure on the ARVN. Broken by the pace, but desperate not to leave the Yards, Brokhausen is ordered to out-process, his request for extension denied, and is forced to leave his friends—his brothers—behind.

Written in the same vivid, immediate style that made We Few a cult classic, Whispers in the Tall Grass follows Habu, Crusader and other teams as they undertake missions in this new, deadlier phase of the war. The narrative veers from hair-raising to tragic and back as the teams insert into hot targets, act as Bright Light for stricken teams, and play hard in between missions to diffuse the ever-rising tension.

Brokhausen’s account brings home the reality and the detail of operating for days within mere meters of the enemy, and movingly convey the bonds that war creates between soldiers.
Show more