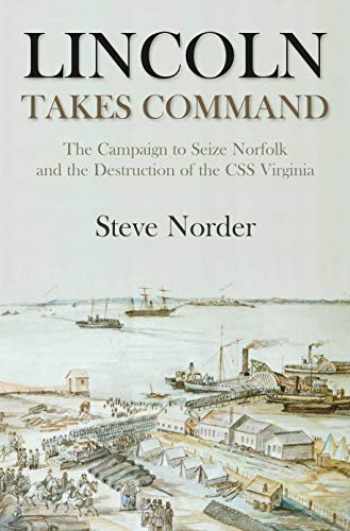 Lincoln Takes Command: The Campaign to Seize Norfolk and the Destruction of the CSS Virginia

On a rainy evening during the Civil War’s second May, President Abraham Lincoln and two of his cabinet secretaries boarded the revenue cutter Miami and sailed to Fort Monroe in Hampton Roads, Virginia. There, for the first and only time in our country’s history, a sitting president assumed direct control of military forces, land and sea, to launch a campaign with wide-ranging consequences. This fascinating and multi-dimensional slice of the war and its effect on the president is but little-known. Thankfully, that gap in the war’s historiography has been ably filled by Steve Norder’s Lincoln Takes Command: The Campaign to Seize Norfolk and the Destruction of the CSS Virginia.

Lincoln recognized the strategic possibilities offered by Maj. Gen. George B. McClellan’s ongoing Peninsula Campaign and the importance of seizing Norfolk, Portsmouth, and the Gosport Navy Yard. For five days that May, the president spent time on sea and land, studied maps, spoke frankly with military leaders, suggested military actions, and—in his quiet, respectful way—issued direct orders to subordinate commanders. His participation set in motion a host of actions that included the naval bombardment of a Confederate fort, the sailing of Union ships up the James River toward the enemy capital, an amphibious landing of Union soldiers followed by an overland march that expedited the capture of Norfolk, Portsmouth, and the Gosport Navy Yard, and the hastening of the destruction of the Rebel ironclad CSS Virginia. Salmon P. Chase, Lincoln’s treasury secretary, described all this as a “brilliant week’s campaign.” Hailed as a military and civilian leader of consequence, the president returned to Washington in triumph. Some close to the president even urged him to assume direct command of the nation’s field armies.

Norder deeply mined newspapers and draws upon a host of primary sources, including letters, diaries, official reports, and memoirs. This rich use of firsthand materials, coupled with fascinating explanatory footnotes, photos, and original maps, allows for a fresh perspective and interesting insights.

Despite the large number of books that have been penned about Lincoln, his presidency, and his struggles during the Civil War, the fascinating week discussed in Lincoln Takes Command—which helped shape a wartime president—has never been told in such fine detail. The successes that crowned his short time in Hampton Roads changed the nation’s commander in chief by giving him a better understanding of, and more confidence in, his ability to see what needed to be accomplished. This insight helped sustain him through the rest of the war.