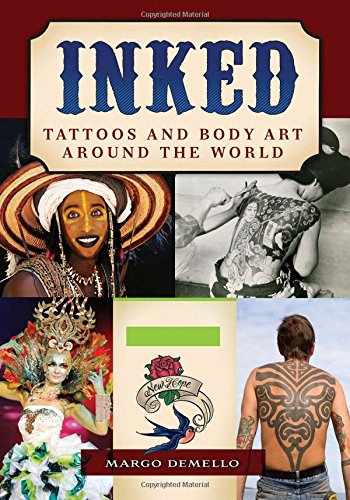 Inked: Tattoos and Body Art around the World [2 volumes]

In recent decades, tattoos have gone from being a subculture curiosity in Western culture to mainstream and commonplace. This two-volume set provides broad coverage of tattooing and body art in the United States today as well as around the world and throughout human history.

In the 1960s, tattooing was illegal in many parts of the United States. Today, tattooing is fully ingrained in mainstream culture and is estimated to be a multi-billion-dollar industry. This exhaustive work contains approximately 400 entries on tattooing, providing historical information that enables readers to fully understand the methods employed, the meanings of, and the motivations behind tattooing―one of the most ancient ways humans mark themselves.

The encyclopedia covers all important aspects of the topic of tattooing: the major types of tattooing, the cultural groups associated with tattooing, the regions of the world where tattooing has been performed, the origins of modern tattooing in prehistory, and the meaning of each society's use of tattoos. Major historical and contemporary figures associated with tattooing―including tattooists, tattooed people, and tattoo promoters―receive due attention for their contributions. The entries and sidebars also address the sociological movements involved with tattooing; the organizations; the media dedicated to tattooing, such as television shows, movies, magazines, websites, and books; and the popular conventions, carnivals, and fairs that have showcased tattooing.

• Provides the most complete global overview of tattooing and body art as it exists today and throughout history, available in one resource

• Addresses the major practices, their historical and cross-cultural locations, and the major cultural groups and places in which tattooing has played a central role in social and cultural practices

• Includes a comprehensive list of resources such as magazines, organizations, websites, and museums devoted to tattooing as well as a glossary and comprehensive bibliography