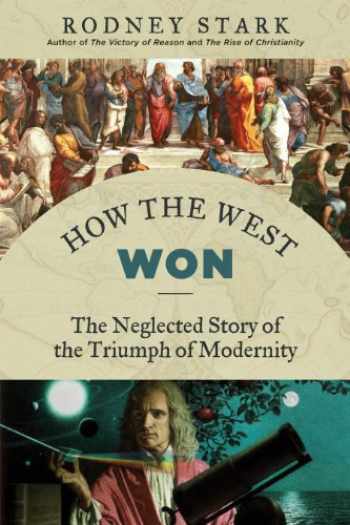 How the West Won: The Neglected Story of the Triumph of Modernity

Finally the Truth about the Rise of the West

Modernity developed only in the Westin Europe and North America. Nowhere else did science and democracy arise; nowhere else was slavery outlawed. Only Westerners invented chimneys, musical scores, telescopes, eyeglasses, pianos, electric lights, aspirin, and soap.

The question is, Why?

Unfortunately, that question has become so politically incorrect that most scholars avoid it. But acclaimed author Rodney Starkprovides the answers in this sweeping new look at Western civilization.

How the West Won demonstrates the primacy of uniquely Western ideasamong them the belief in free will, the commitment to the pursuit of knowledge, the notion that the universe functions according to rational rules that can be discovered, and the emphasis on human freedom and secure property rights.

Taking readers on a thrilling journey from ancient Greece to the present, Stark challenges much of the received wisdom about Western history. How the West Won shows, for example:

Why the fall of Rome was the single most beneficial event in the rise of Western civilization
Why the Dark Ages” never happened
Why the Crusades had nothing to do with grabbing loot or attacking the Muslim world unprovoked
Why there was no Scientific Revolution” in the seventeenth century
Why scholars’ recent efforts to dismiss the importance of battles are ridiculous: had the Greeks lost at the Battle of Marathon, we probably would never have heard of Plato or Aristotle

Stark also debunks absurd fabrications that have flourished in the past few decades: that the Greeks stole their culture from Africa; that the West’s discoveries” were copied from the Chinese and Muslims; that Europe became rich by plundering the non-Western world. At the same time, he reveals the woeful inadequacy of recent attempts to attribute the rise of the West to purely material causesfavorable climates, abundant natural resources, guns and steel.

How the West Wondisplays Rodney Stark’s gifts for lively narrative history and making the latest scholarship accessible to all readers. This bold, insightful book will force you to rethink your understanding of the West and the birth of modernityand to recognize that Western civilization really has set itself apart from other cultures.