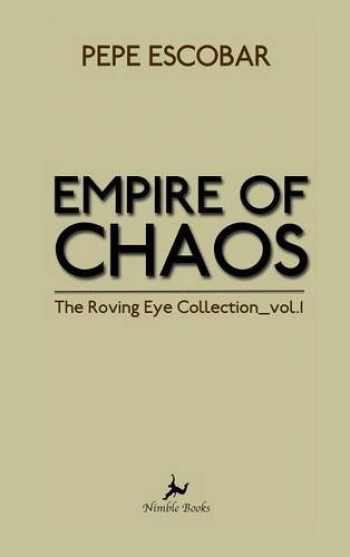 Acknowledged authors Escobar, Pepe wrote Empire of Chaos comprising 630 pages back in 2014. Textbook and eTextbook are published under ISBN 1608881644 and 9781608881642. Since then Empire of Chaos textbook was available to sell back to BooksRun online for the top buyback price or rent at the marketplace.
Show more

From Syria and Iraq to Ukraine, from AfPak to Libya, from Iran to Russia, and from the Persian Gulf to China, foreign correspondent Pepe Escobar, author of The Roving Eye column for Asia Times/Hong Kong, crisscrosses what the Pentagon calls the "arc of instability."

As Escobar tells it in the introduction, "the columns selected for this volume follow the period 2009-2014 - the Obama years so far. A continuum with previous volumes published by Nimble Books does apply. Globalistan, from 2007, was an extended reportage/warped travel book across the Bush years, where I argued the world was being plunged into Liquid War - alluding to energy flows but also to the liquid modernity character of post-modern war. Red Zone Blues, also from 2007, was a vignette - an extended reportage centering on the Baghdad surge. And Obama does Globalistan, from 2009, examined how the hyperpower could embark on a "change we can believe in". The outcome, as these columns arguably reflect, is Empire of Chaos - where a plutocracy progressively projects its own internal disintegration upon the whole world."

Incrementally, I have been arguing that Washington's number one objective now is to prevent a full economic integration of Eurasia that would leave the U.S. as a non-hegemon, or worse still, an outsider. Thus the three-pronged strategy of "pivoting to Asia" (containment of China); Ukraine (containment of Russia); and beefing up NATO (subjugation of Europe, and NATO as Global Robocop)."

Book the ultimate trip to the Empire of Chaos, and see how the U.S. - and the West - are tackling the emergence of a multipolar world.