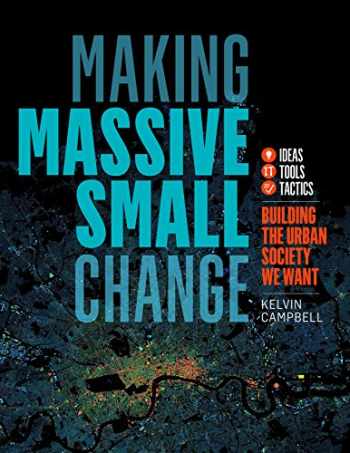 The key to fixing our broken patterns of urban development does not lie in grand plans or giant projects; rather, it lies in the collective wisdom and energy of people harnessing the power of many small ideas and actions to make a big difference. We call this making “Massive Small” change.

In an increasingly complex and changing world where global problems are felt locally, the systems we use to plan, design, and build our urban neighborhoods are failing. For three generations, governments the world over have tried to order and control the evolution of cities through rigid, top-down action. Yet, master plans lie unfulfilled, housing is in crisis, the environment is under threat, and the urban poor have become poorer.

The system is not broken: it was built this way. And governments alone cannot solve these problems. But there is another way―the Massive Small way―a concept developed by Kelvin Campbell, the innovative founder of Urban Initiatives, an internationally recognized urban design practice based in London, and curator of Smart Urbanism [Massive Small], one of the largest LinkedIn communities in the field of online urbanism.

Making Massive Small Change, the first truly comprehensive sourcebook to come out of this work, showcases cities as they really are―deeply complex, adaptive systems. As such, it offers an alternative to our current highly mechanistic model of urban development. With roots in the work of great urban theorists such as Jane Jacobs, Christopher Alexander, and E. F. Schumacher, Making Massive Small Change integrates this thinking with Complexity Theory and a scientific understanding of sustainability and resilience in cities. It sets out the enabling protocols, conditions, and behaviors that deliver Massive Small change in our neighborhoods. It describes and illustrates the ideas, tools, and tactics being used to help engaged citizens, civic leaders, and urban professionals to work together to build viable urban society, and it will show how effective system change can be implemented.

Highly illustrated with stunning graphics and photographs of cityscapes and urban life, this essential toolkit for the future can be called the next Whole Earth Catalog for twenty-first century urban planning and development.