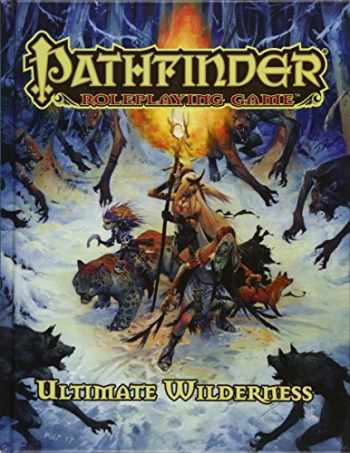 Acknowledged authors Staff, Paizo wrote Pathfinder Roleplaying Game: Ultimate Wilderness comprising 288 pages back in 2017. Textbook and eTextbook are published under ISBN 1601259867 and 9781601259868. Since then Pathfinder Roleplaying Game: Ultimate Wilderness textbook was available to sell back to BooksRun online for the top buyback price of $ 0.30 or rent at the marketplace.
Show more

Answer the Call
Wild, untamed lands hold a wealth of mystery and danger, providing the perfect backdrop for heroic adventure. Whether adventurers are climbing mountains in search of a dragon's lair, carving their way through the jungle, or seeking a long-lost holy city covered by desert sands, Pathfinder RPG Ultimate Wilderness gives them the tools to survive the wilds. A new 20-level base class, the shifter, puts animalistic powers into the hands-or claws-of player characters and villains alike, with new class features derived from animalistic attributes. Overviews of druidic sects and rituals, as well as new archetypes, character options, spells, and more, round out the latest contribution to the Pathfinder RPG rules!
Pathfinder RPG Ultimate Wilderness is an invaluable hardcover companion to the Pathfinder RPG Core Rulebook. This imaginative tabletop game builds upon more than 10 years of system development and an open playtest featuring more than 50,000 gamers to create a cutting-edge RPG experience that brings the all-time best-selling set of fantasy rules into a new era.

Pathfinder RPG Ultimate Wilderness includes:
►The shifter, a new character class that harnesses untamed forces to change shape and bring a heightened level of savagery to the battlefield!
►Archetypes for alchemists, barbarians, bards, druids, hunters, investigators, kineticists, paladins, rangers, rogues, slayers, witches, and more!
► Feats and magic items for characters of all sorts granting mastery over the perils of nature and enabling them to harvest natural power by cultivating magical plants.
►Dozens of spells to channel, protect, or thwart the powers of natural environs.
►New and expanded rules to push your animal companions, familiars, and mounts to wild new heights.
►A section on the First World with advice, spells, and other features to integrate the fey realm into your campaign.
►Systems for exploring new lands and challenging characters with natural hazards and strange terrain both mundane and feytouched.
►AND MUCH, MUCH MORE!