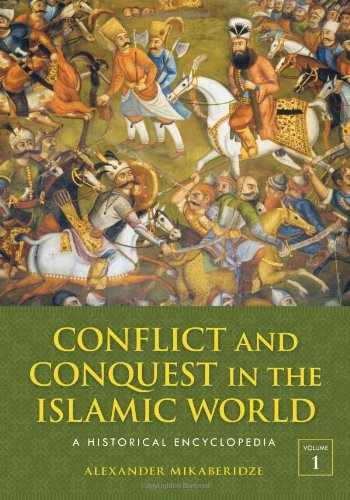 Conflict and Conquest in the Islamic World: A Historical Encyclopedia [2 volumes]

A reference work that thoroughly documents the extensive military history of the Islamic world between the 7th century and the present day.

Military-political conflict―and the resulting factionalism, shifts in leadership, and divergent belief systems―has been a constant and crucial part of the Islamic world. In order to fully grasp the cultural, social, or political aspects of Islam in the modern world, it is necessary to comprehend the rich tapestry of Islamic history from pre-Islamic times to the present, much of which involved armed conflict.

Conflict and Conquest in the Islamic World: A Historical Encyclopedia provides hundreds of entries on wars, revolutions, sieges, institutions, leaders, armies, weapons, and other aspects of wars and military life, enabling readers to understand the complex role conflict has played in Islamic life throughout history and see how Islamic warfare has evolved over the centuries. This reference work covers not only the traditional Middle Eastern regions and countries but also provides relevant historical information regarding Islam in North Africa, Central Asia, Southeastern Asia, and Oceania.

• Provides over 600 A–Z entries, many with accompanying images