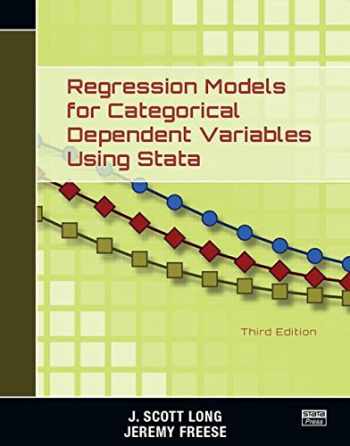 Regression Models for Categorical Dependent Variables Using Stata, Third Edition shows how to use Stata to fit and interpret regression models for categorical data. The third edition is a complete rewrite of the book. Factor variables and the margins command changed how the effects of variables can be estimated and interpreted. In addition, the authors' views on interpretation have evolved. The changes to Stata and to the authors' views inspired the authors to completely rewrite their popular SPost commands to take advantage of the power of the margins command and the flexibility of factor-variable notation. The new edition will interest readers of a previous edition as well as new readers. Even though about 150 pages of appendixes were removed, the third edition is about 60 pages longer than the second.

Although regression models for categorical dependent variables are common, few texts explain how to interpret such models; this text fills the void. With the book, Long and Freese provide a suite of commands for model interpretation, hypothesis testing, and model diagnostics. The new commands that accompany the third edition make it easy to include powers or interactions of covariates in regression models and work seamlessly with models estimated with complex survey data.

The authors' new commands greatly simplify the use of margins, in the same way that the marginsplot command harnesses the power of margins for plotting predictions. The authors discuss how to use margins and their new mchange, mtable, and mgen commands to compute tables and to plot predictions. They also discuss how to use these commands to estimate marginal effects, averaged either over the sample or at fixed values of the regressors. The authors introduce and advocate a variety of new methods that use predictions to interpret the effect of variables in regression models.

The third edition begins with an excellent introduction to Stata and follows with general treatments of the estimation, testing, fit, and interpretation of this class of models. New to the third edition is an entire chapter about how to interpret regression models using predictions―a chapter that is expanded upon in later chapters that focus on models for binary, ordinal, nominal, and count outcomes.

Long and Freese use many concrete examples in their third edition. All the examples, datasets, and author-written commands are available on the authors' website, so readers can easily replicate the examples with Stata. This book is ideal for students or applied researchers who want to learn how to fit and interpret models for categorical data.