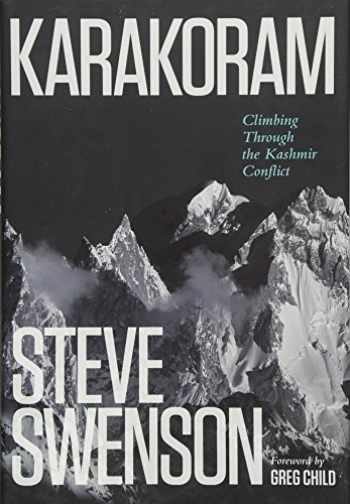 Karakoram: Climbing Through the Kashmir Conflict

Acknowledged authors Swenson, Steve wrote Karakoram: Climbing Through the Kashmir Conflict comprising 320 pages back in 2017. Textbook and eTextbook are published under ISBN 1594859736 and 9781594859731. Since then Karakoram: Climbing Through the Kashmir Conflict textbook was available to sell back to BooksRun online for the top buyback price or rent at the marketplace.
Show more

• The Karakoram is home to K2, the deadliest of the world’s 8,000-meter peaks

The best mountain climbing in the world, Steve Swenson will tell you, is in the Karakoram. Swenson has been climbing in these mountains since 1980 and has a perspective on the land and its people like few others. A complex place, the Karakoram Range is located in Kashmir, a western Himalaya border region that has a long history of tension and conflict between China, India, and Pakistan, tensions that have only been magnified since 9/11. Over the course of more than thirty years climbing there, Swenson’s experiences have been laced with daunting challenges, exhilarating successes, and terrifying moments―caused by the risks inherent in alpine environments, as well as politics below spilling into the peaks above.

In Karakoram: Climbing Through the Kashmir Conflict, Swenson writes evocatively of his naiveté on his first visit to Pakistan for an attempt on Gasherbrum IV, during which he faced the teeming, bewildering streets of Islamabad and new challenges of dealing with a confusing array of bureaucrats, hiring hundreds of porters desperate for work, as well as the business of attempting to climb a towering peak just shy of 8,000 meters. By 2015 when he invited climbers to join him on an attempt of K6, Swenson had become the old-hand; it was his familiarity with the region that got them through the planning, the trek, and the climb.

Even as he managed a busy career and family at home, Swenson returned to the region more than a dozen times, making attempts on well known giants such as K2, Everest, and Nanga Parbat, as well as other, less familiar, peaks. While he often succeeded, he was often turned back, forced from the mountains by weather, failed logistics, fractured team dynamics, or unexpected skirmishes in the region. What drew him, again and again, was that he always learned something new and forged strong bonds with his climbing partners, including Doug Scott, Alex Lowe, Steve House, and others. Stronger still became his friendship with Haji Ghulam Rasool, a local Balti man whom he first met as a young cook in 1984. Rasool and other Pakistanis have served as Swenson’s window on this restive region, revealing how territorial conflicts can affect not just international climbing expeditions, but also the day-to-day livelihood of the local people.

Karakoram is Swenson’s personal story of adventure in one of the most dangerous mountain environments on the planet. His love of climbing led him to these summits; his deep respect for the rugged landscapes and local people inspire his return.
Show more