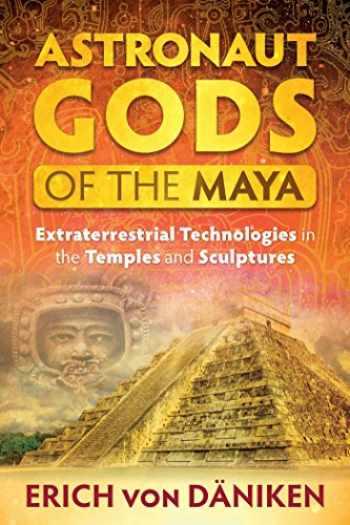 Astronaut Gods of the Maya: Extraterrestrial Technologies in the Temples and Sculptures

A visual tour of the evidence for ancient astronauts in Mesoamerica

• Details the astronaut technology--helmets, tanks, hoses, keyboards, rockets--clearly illustrated in stone carvings and statues from Mesoamerican sites such as Palenque, Chichén Itzá, and Teotihuacán in Mexico and Tikal in Guatemala

Sharing more than 200 never-before-published full-color photographs from his personal archives, bestselling author Erich von Däniken provides clear evidence of ancient alien contact and technology among the archaeological sites of the Maya as well as other ancient cultures, such as the Aztecs and the Hindus. He reveals how the “gods” immortalized in Maya sculptures, carved reliefs, and myth were not supernatural beings but technologically advanced visitors, astronauts who gifted the Maya with their sophisticated understanding of calendar time and cosmology. He explains how, with no explanation for their technologies and origins, the Maya interpreted the visitors as divine and, thus, the “gods” were born.

Examining stone carvings and statues from many Mesoamerican sites such as Palenque, Chichén Itzá, and Teotihuacán in Mexico and Tikal in Guatemala, von Däniken reveals the astronaut technology--helmets, tanks, hoses, keyboards, rockets--clearly illustrated in these ancient depictions of the gods. He explores the similarities of Plato’s writings with the Chilam Balam books of Mexico and compares “ancient alien” features in myths around the world, paralleling how mercury is mentioned as a fuel ingredient of flying machines in ancient India with the discovery of mercury at Copán, Palenque, and Teotihuacán as well as in the grave of a Chinese emperor and two Egyptian graves on Nabta Playa. Illustrating the similarities of Mayan step pyramids with those of Kanchipuram in South India, the author explains how Mayan pyramids are crowned with a small temple, residence, or landing field of the gods, while the pyramids of South India are topped with a Vimana, a “godly” flying vehicle.

Offering visual proof of the ancient world’s contact with advanced alien visitors they recorded as gods and teachers, von Däniken also raises the question of the “heavenly” origins of royal families and dynasties in Mesoamerica, Egypt, and beyond, revealing how the Mayan kings of Palenque and the pharaohs of Egypt may be descendants of the “gods.”