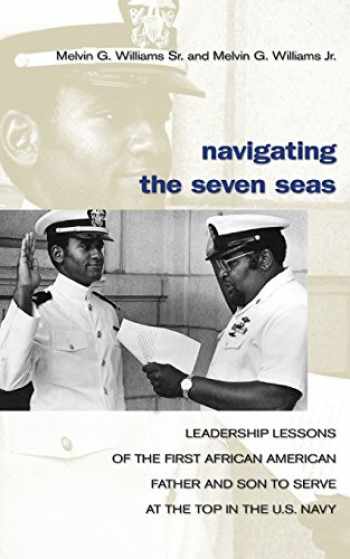 Navigating the Seven Seas: Leadership Lessons of the First African American Father and Son to Serve at the Top in the U.S. Navy

Navigating the Seven Seas is an account of the leadership experiences two high-achieving African-Americans in the U.S. Navy. This father and son duo both achieved leadership ranks in the service of their country by following certain precepts than can applied for success in any profession, both military and civilian.

Melvin G. Williams, Sr. served in the U.S. Navy for 27 years (1951-1978) and reached the highest enlisted leadership rank of Master Chief, with final Navy leadership assignment as a Command Master Chief. His son, Melvin G. Williams, Jr., served 32 years (1978-2010) and reached the rank of Vice Admiral with final Navy leadership assignment as a Fleet Commander). As two African Americans who served the nation for nearly 60 consecutive years across two generations, they hope to provide readers with their perspectives on leadership.

Their book describes how they navigated up through the ranks of the U.S. Navy to positions of greater responsibility by employing their "Seven Cs" of leadership: Character, Competence, Courage, Commitment, Caring, Communicating, and Community.

Their book addresses the questions regarding who a leader is, what a leader does, why and how a leader performs? Although the context of their experiences is with the U.S. Navy, their message is that the seven Leadership Cs are germane to all readers, regardless of occupation or leadership situation (civilian, military, public and private industry, etc.), and regardless of the reader's background, culture, or gender.

The authors contend that leadership is an art and a science and that leadership can be learned, practiced, and refined and that there is no stereotypical type cast mold for leaders. They argue that if they as members of a minority can rise to leadership roles in the U.S. Navy by following these key principles to navigate across the rough seas of life, then anyone can employ these rules to rise to increased leadership responsibility in any profession or career.