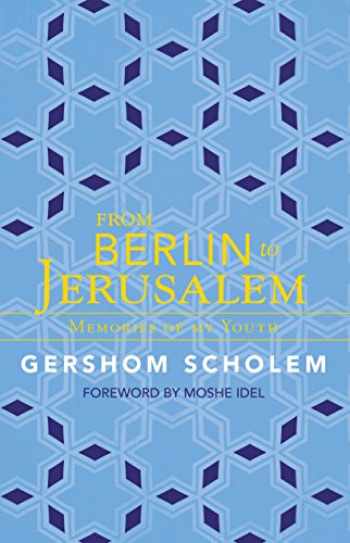 From Berlin to Jerusalem: Memories of My Youth

"A serene, lucid and stylish essay in intellectual autobiography that at the same time commemorates a vanished world."—Times Literary Supplement

"An extraordinary life—one that itself takes on symbolic, if not mystical, significance." Robert Coles

From Berlin to Jerusalem portrays the dual dramas of the author's total break from his middle-class German Jewish family and his ever-increasing dedication to the study of Jewish thought. Played out during the momentous years just before, during, and after World War I, these experiences eventually led Scholem to immigrate to Palestine in 1923.

"Gershom Scholem is historian who has remade the world…He is coming to be seen as one of the greatest shapers of contemporary thought, possibly the boldest mind-adventurer of our generation."—Cynthia Ozick, New York Times Book Review

"[Scholem] vividly describes the spiritual and intellectual odyssey that drew him…to a rigorous immersion in the texts of Jewish tradition."—Library Journal

Gershom Scholem (18971982) was born in Berlin and educated at the Universities of Berlin, Jena, Bern, and Munich. In 1923, he immigrated to Palestine, where he devoted the rest of his life to the study of the Jewish mystical tradition and the Kabbala. In Jerusalem, he was appointed the first professor of Jewish mysticism at Hebrew University and served as president of the Israel Academy of Sciences and Humanities. Scholem was the author of many books, including Major Trends in Jewish Mysticism, On the Kabbalah and Its Symbolism, Sabbatai Sevi: The Mystical Messiah, and On Jews and Judaism in Crisis: Selected Essays (also now available from Paul Dry Books).