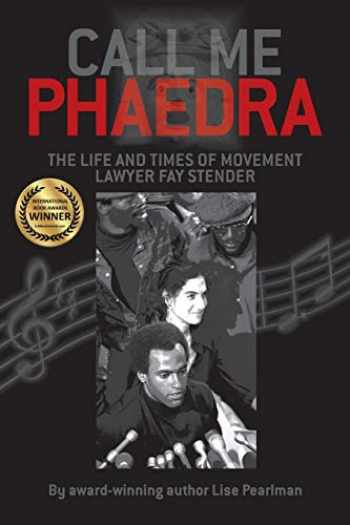 Call Me Phaedra: The Life and Times of Movement Lawyer Fay Stender

Who was Fay Abrahams Stender? A giant among Movement lawyers from the McCarthy Era to the 1970s intent on forcing society to change. Friends could easily picture her as the heroine of a grand opera. A child prodigy, she abandoned the concert piano to become a zealous advocate for society's most scorned and vilified criminal defendants: from the Rosenberg espionage case during the Cold War to militant black clients, Black Panther Party leader Huey Newton and revolutionary prisoner George Jackson, to prisoners in the "Dachau" of maximum security. Stender achieved amazing legal successes in criminal defense and prison reform before she ultimately refocused with similar zeal on feminist and lesbian rights.

In May 1979, an ex-felon invaded her home and shot her execution-style after forcing her to write a note saying she betrayed George Jackson. She barely survived. Wheelchair bound and under 24-hour police protection, she then became the star witness in her assailant's prosecution. Awaiting trial in a secret hideaway in San Francisco, Fay told the few friends she let visit her there to "call me Phaedra," a tragic heroine from Greek mythology. Shortly after the trial, like Phaedra, she committed suicide.

Set against a backdrop of sit-ins, protest marches, riots, police brutality, assassinations, death penalty trials and bitter splits among Leftists, this book makes for a compelling biography. Yet it delivers on a broader goal as well - an overview of the turbulent era in which Fay Stender operated under the watchful eye of the FBI and state officials. We not only relive Stender's story, but that of a small cadre of committed Bay Area activists who played remarkable roles during the McCarthy Era, Civil Rights Movement (including Mississippi Freedom Summer), the Free Speech Movement, Vietnam War protests, and the rise of Black Power.

By the fall of 1970, Stender had gained international press coverage as the most sought-after Movement lawyer in America. She had just achieved spectacular successes against all odds for two black revolutionary clients. The book also describes Stender's ultimate failure to surmount class and racial differences to make her clients' cause her own and how, as in a Greek tragedy, hubris led to her downfall. Fay's tragic end served as a sobering lesson to her Movement friends of the personal risks many of them had run. For many, her death symbolized the end of an era.