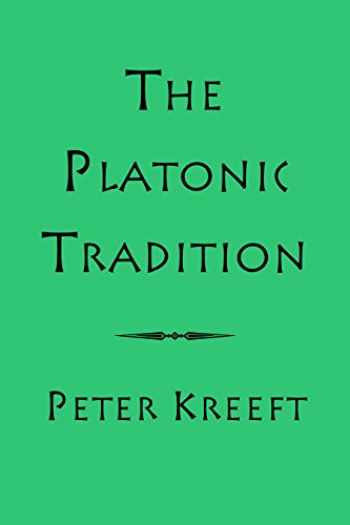 Acknowledged authors Kreeft, Peter wrote The Platonic Tradition comprising 152 pages back in 2018. Textbook and eTextbook are published under ISBN 1587316501 and 9781587316500. Since then The Platonic Tradition textbook was available to sell back to BooksRun online for the top buyback price of $ 4.04 or rent at the marketplace.
Show more

The Platonic tradition in Western philosophy is not just one of many equally central traditions. It is so much THE central one that the very existence and survival of Western civilization depends on it. It is like the Confucian tradition in Chinese culture, or the monotheistic tradition in religion, or the human rights tradition in politics.

In the first of his eight lectures, Peter Kreeft defines Platonism and its “Big Idea,” the idea of a transcendent reality that the history of philosophy has labeled “Platonic Ideas” or Platonic Forms. In the second lecture, he briefly explores Plato’s two basic predecessors or sources, myth and Socrates; and then looks at 12 applications of the Forms in Plato’s own dialogues. The third lecture covers the three most important modifications or additions to Plato himself in the Platonic tradition: Aristotle, Plotinus, and Augustine, each of whom gave the Forms a new metaphysical address. The fourth lecture explores six Christian Platonists, three in the New Testament and three philosophers, Justin Martyr, Bonaventure, and Aquinas.
The next three lectures explore the consequences of the modern abandoning of Platonism, beginning with William of Ockham’s Nominalism, as the source of nearly all modern philosophical errors, and its results in the Empiricism of Locke and Hume, the so-called Copernican Revolution in philosophy in Kant, the so-called “analytic philosophy,” which still dominates English and American philosophy departments. In the sixth essays, Kreeft looks at 13 influential kinds of positivism or reductionism in modern thought: in method, history, metaphysics, epistemology, ethics, sociology, politics, logics, linguistics, sex, psychology, and theology, exemplified by Descartes, Machiavelli, Hobbes, Marx, Kant, Comte, Rousseau, Rawls, Ayer, Derrida, Freud, Skimmer, Nietzsche, and Sartre. Lecture 7 looks at the results of abandoning the Platonic tradition in ethics, the values vacuum, or nihilism, in Ecclesiastes, Pascal, Kierkegaard, Nietzsche, Heidegger, Sartre, Dostoyevsky, Tolstoi, Marcel, and Buber. In the last lecture, Kreeft looks at some experiential evidence for Platonism, doors out of the cave that are still open, signals of transcendence.