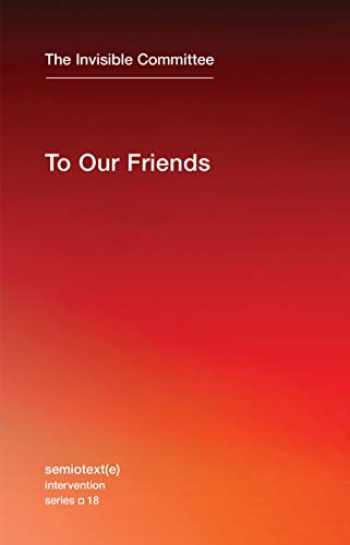 To Our Friends (Semiotext(e) / Intervention Series)

Acknowledged author The Invisible Committee wrote To Our Friends (Semiotext(e) / Intervention Series) comprising 240 pages back in 2015. Textbook and eTextbook are published under ISBN 1584351675 and 9781584351672. Since then To Our Friends (Semiotext(e) / Intervention Series) textbook was available to sell back to BooksRun online for the top buyback price of $ 3.01 or rent at the marketplace.
Show more

A reflection on, and an extension of, the ideas laid out seven years ago in The Coming Insurrection.

The Invisible Committee's The Coming Insurrection was a phenomenon, celebrated in some quarters and inveighed against in others, publicized in media that ranged from campus bulletin boards to Fox News. Seven years later, The Invisible Committee follows up their premonitory manifesto with a new book, To Our Friends.

From The Invisible Committee:

In 2007 we published The Coming Insurrection in France. It must be acknowledged that a number of assertions by the Invisible Committee have since been confirmed, starting with the first and most essential: the sensational return of the insurrectionary phenomenon. Who would have bet a kopeck, seven years ago, on the overthrow of Ben Ali or Mubarak through street action, on the revolt of young people in Quebec, on the political awakening of Brazil, on the fires set French-style in the English or Swedish banlieues, on the creation of an insurrectionary commune in the very heart of Istanbul, on a movement of plaza occupations in the United States, or on the rebellion that spread throughout Greece in December of 2008?

During the seven years that separate The Coming Insurrection from To Our Friends, the agents of the Invisible Committee have continued to fight, to organize, to transport themselves to the four corners of the world, to wherever the fires were lit, and to debate with comrades of every tendency and every country. Thus To Our Friends is written at the experiential level, in connection with that general movement. Its words issue from the turmoil and are addressed to those who still believe sufficiently in life to fight as a consequence.

To Our Friends is a report on the state of the world and of the movement, a piece of writing that's essentially strategic and openly partisan. Its political ambition is immodest: to produce a shared understanding of the epoch, in spite of the extreme confusion of the present.