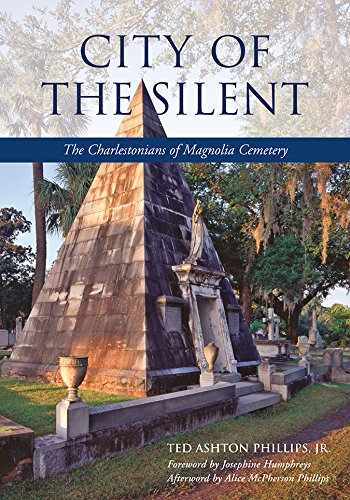 City of the Silent: The Charlestonians of Magnolia Cemetery (Non Series)

Charleston is a city of stories. As in any city of historical significance, some of its best stories now lie buried with its dead. Ted Ashton Phillips, Jr., was custodian of many of the stories of those Charlestonians interred in Magnolia Cemetery, the picturesque burial ground located along the Cooper River north of downtown. Phillips's fascination with Magnolia began at the age of sixteen, when he worked there as a groundskeeper and assistant gravedigger. He followed his passion into the research represented in this collective biography of more than two hundred of the most famous, infamous, and influential individuals who lie buried among the thirty thousand permanent residents of Magnolia Cemetery.Taking its title from the poem that William Gilmore Simms delivered at the 1850 consecration of the cemetery, City of the Silent is a unique guide to some of the complex personalities who have contributed to the Holy City's rich culture. The book includes entries on writers, artists, statesmen, educators, religious leaders, scientists, war heroes, financiers, captains of industry, slave traders, socialites, criminals, victims, and others. Some of these men and women are as distinguished as author Josephine Pinckney, civil rights champion J. Waties Waring, and artist Alice Ravenel Huger Smith. Others are as notorious as bootlegger Frank "Rumpty Rattles" Hogan, adulterous killer Dr. Thomas McDow, and brothel-keeper Belle Percival. In addition to the biographical sketches, City of the Silent includes a foreword by Josephine Humphreys, Charleston writer and longtime friend of the author, and an afterword by Phillips's daughter Alice McPherson Phillips. The volume also features more than forty illustrations, an introductory essay by historian Thomas J. Brown examining how the cemetery became a leading site of historical memory in the aftermath of the Civil War, and sets of maps and thematic tours that invite visitors to locate the featured graves within Magnolia's evocative grounds.