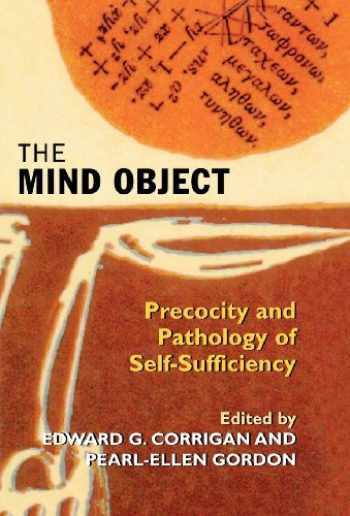 The Mind Object: Precocity and Pathology of Self-Sufficiency

How to Help People Who Have Only Their Minds to Love

Can a person relate to his or her own mind as an object, depend upon it to the exclusion of other objects, idealize it, fear it, hate it? Can a person live out a life striving to attain the elusive power of the mind's perfection, yielding to its promise while sacrificing the body's truth?

Winnicott was the first to describe how very early in life an individual can, in response to environmental failure, turn away from the body and its needs and establish "mental functioning as a thing in itself." Winnicott's elusive term, the mind-psyche, describes a subtle, yet fundamentally violent split in which the mind negates the role of the body, its feelings and functions, as the source of creative living. Later, Masud Khan elaborated on Winnicott's notions. This exciting book extends Winnicott's and Khan's ideas to introduce the concept of the mind object, a term that signifies the central dissociation of the mind separated from the body, as well as underscores its function.

When the mind takes on a life of its own, it becomes an object–separate, as it were, from the self. And because it is an object that originates as a substitute for maternal care, it becomes an object of intense attachment, turned to for security, solace, and gratification. Having achieved the status of an independent object, the mind also can turn on the self, attacking, demeaning, and persecuting the individual. Once this object relationship is established, it organizes the self, providing an aura of omnipotence. However, this precocious, schizoid solution is an illusion, vulnerable to breakdown and its associated anxieties.

Making a unique contribution, The Mind Object explores the dangers of knowing too much–the lure of the intellect–for the patient as well as for the therapist. The authors illuminate the complex pathological consequences that result from precocious solutions.