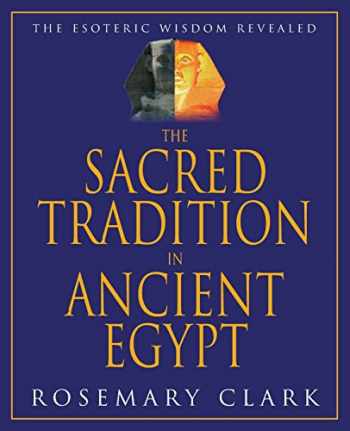 The Sacred Tradition in Ancient Egypt: The Esoteric Wisdom Revealed

For hundreds of years, people have been amazed at the mysterious buildings and symbols that came out of ancient Egypt. The Romany people, who came from India, were called "Gypsies" because they were thought to come from Egypt.

But where can you find accurate information that fully presents the mystical tradition of ancient Egypt? You'll not only discover all of the traditional wisdom, but also how you can apply it to your life today in The Sacred Tradition in Ancient Egypt by Egyptologist Rosemary Clark.

This is a massive book of over 475 information-filled pages. You'll discover the histories and mysteries presented in a different way. To the ancient Egyptians, spirituality was a part of life. Their temples were not just buildings, they were representations of the cosmos and of spiritual development.

You will learn how to apply the ancient myths and astrology secrets to your life today. You will discover the meanings of the famous hieroglyphic texts written in coffins and pyramids. In short, you'll find out how the wisdom from thousands of years ago can make your life better today.
Other applicable secrets revealed here include methods of clairvoyance, prophecy, healing, reincarnation, Hermetic philosophy, and communication with your ancestors.

The author has been a well-known Egyptologist for years. She has appeared on television as the founder of Temple Harakhte, a group of men and women devoted to the experiential religious practices of Egypt's Old Kingdom. Now she shares this wisdom with you. All you have to do is take it.