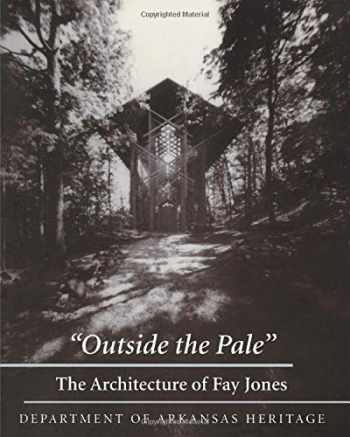 Outside the Pale: The Architecture of Fay Jones

Honored with the 1990 American Institute of Architects Gold Medal for a lifetime of outstanding achievement, Fay Jones is an Arkansas original. In receiving the medal from Prince Charles of Great Britain, Jones was hailed as a “powerful and special genius who embodies nearly all the qualities we admire in an architect” and as an artist who used his vision to craft “mysterious and magical places” not only in Arkansas but all over the world.

This book accompanied a special museum exhibit of Jones’s life and work at the Old State House in Little Rock. It traces Jones’s development from his early years as a student of Frank Lloyd Wright and Bruce Goff, to the culmination of his ability in such arresting structures as Pinecote Pavilion in Picayune, Mississippi; Thorncrown Chapel in Eureka Springs, Arkansas; and Chapman University Chapel in Orange, California. Through the black-and-white photographs of the homes, chapels, and other buildings that Jones has created and the accompanying captions and interviews of the architect, the reader is allowed a view into this man’s remarkable talent.

Designing structures that fuse architecture and landscape, the organic and the man-made, Jones has created special places which touch their viewers with the power and subtlety of poetry. Herein we learn why.

From the Foreword by Robert Adams Ivy Jr.:

“Fay Jones’s architecture begins in order and ends in mystery. . . . His role can perhaps best be understood as mediator, a human consciousness that has arisen from the Arkansas soil and scoured the cosmos, then spoken through the voices of stone and wood, steel and glass. Art, philosophy, craft, and human aspiration coalesce in his masterworks, transformed from acts of will into harmonies: Jones lets space sing.”